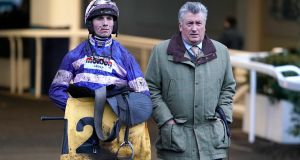 Paul Nicholls knows better than anyone what will be required when he bids to add to his tally of 10 King George VI chases with Clan Des Obeaux and Cyrname in the Ladbrokes-sponsored showpiece at Kempton on St Stephen’s Day.

The 11-times champion trainer first enjoyed success in the Grade One contest in 1997, when Andrew Thornton steered See More Business to a two-length victory.

The gelding was pulled up when trying to defend his title the following year, but bounced back in 1999 for a runaway 17-length victory under Mick Fitzgerald.

Nicholls said: “He was the first good horse I ever had, and he probably put me on the map.

“He was a fantastic horse who won a Gold Cup and two King Georges.”

“He’d had a hard race in the Charlie Hall when he broke the track record, and I wondered if he could possibly improve from that – and he improved beyond all recognition. It was a bit of a demolition job.”

Nicholls’ dominance in the race was established during the era of Kauto Star, who posted a record five King George victories across six seasons.

He lifted his first title in 2006, retaining the race until the 2010/11 season when he finished third behind Long Run and was later found to be battling an infection.

Nicholls and Kauto Star returned to Kempton to light up Christmas again in 2011 – banishing any thoughts the 11-year-old should have been retired when defeating old rival Long Run by a length and a quarter to claim a remarkable fifth triumph.

Ruby Walsh, who was on board during all five victories, said: “Kauto Star was an incredible racehorse, a once-in-a-lifetime horse.

“He evolved over his five King Georges from being a bit keen and a very fast horse in the beginning to being an out-and-out stayer in the end.

When he won five it was just one of those days you’ll never, ever forget – a fantastic day

“He attacked his fences and he had no trouble with the trip, so he was just a brilliant horse.

Kauto Star remains the most successful horse in the history of the race, with trainer Nicholls saying: “He loved the track. Kempton was made for him really. He had the rare things of lots and lots of speed and also could stay. Not many have got both.

“When he won five it was just one of those days you’ll never, ever forget – a fantastic day.”

Kauto Star was retired in 2012, but it did not take long for another horse from the Nicholls yard to follow in his footsteps.

Silviniaco Conti won his trainer an eighth King George in 2013, a 3½-length success over Cue Card, following up the victory with another the following year.

Nicholls said: “I sort of have to pinch myself sometimes that we’d had Kauto and then all of a sudden Conti replaced him, and he came along at the right time.”

Noel Fehily, who steered the chestnut to both victories, said: “He was a fantastic horse to ride and a very good jumper. He was a very straightforward horse – you could put him wherever you wanted in a race.

“The first year he won the King George he followed Cue Card around, and then the following year he made the running. He often made all – which made him a very straightforward horse and a class horse to ride.”

I’m very lucky to have won 10 King Georges, especially with the horses I have

The seven-year-old looks to repeat the success this year, but is of course challenged by another star from the Ditcheat yard, Cyrname.

The highest-rated jumps horse in training, Cyrname travels to Kempton having taken the scalp of Altior in the Christy 1965 Chase at Ascot in November.

Colin Tizzard’s Lostintranslation is the main threat to another victory for Ditcheat.

“I’m very lucky to have won 10 King Georges, especially with the horses I have,” said Nicholls.

Tottenham give 550 non-playing staff a 20 per cent pay cut 12:02
Sky Sports customers save on bills; rule changes could change rugby utterly 07:25
Uefa meet to re-evaluate hopes of finishing current season 06:48
Gerry Thornley: Changes to tackle laws could transform rugby by time of next World Cup 07:18
Five newly-released sports books to read over the coming weeks 07:31
Here is your handy guide to sport on television this week