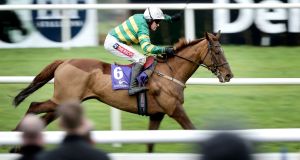 Once again the weight of JP McManus’s challenge is stamped all over Friday’s €200,000 Paddy Power Chase at Leopardstown.

The renowned owner and businessman has eight of the 28 runners – plus two of the three reserves – for the most valuable race of the Christmas period.

McManus, who is pursuing a ninth victory in the handicap highlight, bookends the ratings with topweight Any Second Now and Killer Miller at the bottom.

In between are half a dozen hopefuls including No Comment, who has travelled from Philip Hobbs’s yard in England.

He has been prominent in ante-post betting markets although Auvergnat’s 28-1 success a year ago indicates how a springer can emerge from such a competitive contest.

McManus isn’t alone in having eight chances. Willie Mullins also has eight shots at repeating his 2013 Paddy Power victory with Rockyaboya. They include McManus’s Blazer who could wind up being a value option.

The versatile eight-year-old hasn’t run since last February when appearing in a valuable handicap hurdle here at the Dublin Racing Festival.

That was on the back of a chase run over two miles at Fairyhouse, although prior to that Blazer lined up in the 2018 Paddy Power when sixth to Auvergnat.

He did well to get as close as he did considering the bad mistake he made six out and was also hampered a couple of fences later.

For a horse that chased home Sharjah in the 2018 Galway Hurdle, Blazer has always appealed as one with a valuable handicap pot in him over fences.

The Mullins team also includes two chances for Syndicates Racing, who have both Cabaret Queen and Listen Dear.

The latter made headlines earlier this winter after her sale from the now defunct Supreme Racing Club but looks one of the outsiders here.

Another McManus contender that looks worth a look is Tower Bridge, who was pulled up in the Troytown last time but chased home A Plus Tard at the Cheltenham Festival in March.

The McManus team will hope for an immediate Grade One return on their investment in new recruit Cerberus, who is set Friday’s Coral Finale Juvenile Hurdle at Chepstow.

Cerberus beat A Wave Of The Sea at Fairyhouse’s Winter Festival after which he changed hands.

He lines up against smart cross-channel three-year-olds including Dan Skelton’s Allmankind.

Chepstow hosts its biggest fixture of the year with topweight Elegant Escape attempting to defend his Welsh Grand National crown.

A dual point-to-point winner this autumn, Space Cadet ran an encouraging race in the Troytown at Navan last month and will be ridden by Mark Enright off bottom-weight.

Just two Irish-trained horses have won the Welsh National. Notre Pere was successful for Jim Dreaper in 2014 while the recently retired Rax De Maree won the 2017 renewal for Gavin Cromwell.