A Plus Tard presents De Bromhead with Cheltenham dilemma 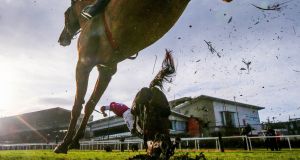 As dilemmas go Henry De Bromhead has an enviable one in trying to decide what race A Plus Tard might line up in at the Cheltenham festival in March.

Rachael Blackmore did the steering on the 4-1 winner for a second Grade One victory of the festival after Notebook’s St Stephen’s Day success.

A Plus Tard was a hugely impressive 16-lengths winner of a handicap over two and a half miles at last year’s Cheltenham festival.

That originally had De Bromhead pondering a potential tilt at the Ryanair Chase this March.

But after Friday’s graduation to Grade One glory, bookmakers have cut A Plus Tard to as low as 8-1 for the two-mile Queen Mother Champion Chase.

With two previous winner of the two-mile crown already under his belt – Sizing Europe (2011) and Special Tiara (2017) – De Bromhead knows precisely what’s required for that race.

So with the reigning current champion Altior failing to meet his Christmas target a decision could rest on the outcome when A Plus Tard returns to Leopardstown for February’s Dublin Racing Festival.

One reliable element though is that going left-handed makes an appreciable difference to the horse.

“That has stamped my left-right theory!” said the trainer who has watched A Plus Tard get beaten on his three-starts going right-handed for him.

The Champion Chase might trump the Ryanair in terms of prestige but De Bromhead admitted: “I know it’s the old and the new course but he is a 16 length course winner (at two and a half miles) so we’ll see.”

He added: “The favourite (Chacun Pour Soi) was so impressive last year it looked like he’d be difficult to beat over this trip.

“I wasn’t convinced this was our trip but the softened ground helped and he jumped great.

“We’ll enter him in the Champion Chase but in my head he was always going for the Ryanair. I think ground would come into play as regards plans. He’ll probably come back for the two mile race here in February.”

That could also come into calculations for Chacun Pour Soi whose first appearance since a spectacular Punchestown festival victory turned into an anti-climax.

Paul Townend’s mount travelled beautifully for much of the race but was beaten shortly after the last.

“He jumped well and ran well. He might have been beaten by a very good horse. I hope he needed the run. We might give him the benefit of that run,” Willie Mullins considered.

The champion trainer and De Bromhead are level for the week so far at Leopardstown with three winners each as Mullins saddled a double on Friday.

The 11-10 favourite Appreciate It dominated the bumper and prompted jockey Patrick Mullins into a second ‘flying dismount’ in the winners enclosure after Faugheen’s St Stephen’s Day heroics at Limerick.

Derek O’Connor on the runner up Freedom To Dream subsequently got a one day ban for his use of the whip.

Earlier Melon got off the mark over fences when landing the Beginners Chase.

When his market rival City Island made the final one of a series of mistakes at the second last fence, and was quickly pulled up, it looked straightforward for Melon.

However under pressure from Gallant John Joe the 5-4 favourite blundered himself at the last and ultimately did well to rally.

“What particularly pleased me was the way he fought back when it looked like the game was up. He makes life difficult for himself but he fought back well today,” Mullins said of the dual-Champion Hurdle runner up.

“I’d imagine the Arkle is the likely target. He could come back here for the Dublin Racing Festival and will need more experience,” he added.

JP McManus was denied in the big race when Roaring Bull edged out the Paddy Power Chase favourite Fitzhenry.

However the owner had earlier scored with The Moyglass Flyer who overcame inexperience to win a competitive handicap hurdle on just his third ever racecourse start.

Mark Walsh had 4-1 joint-favourite prominent throughout as the other market fancy Moon Over Germany cut out the running.

That one faded to eighth but after showing understandable signs of greenness The Moyglass Flyer ultimately beat the 33-1 outsiders Daybreak Boy and Golden Jewel with some authority.

“I was a bit worried about his lack of experience but Mark gave him a lovely ride and he jumped well. His jumping had let him down a bit previously.

“He ran well on his first run of the season at Navan and that was another step forward. He looks like a horse that might stay further and certainly will handle a step up in class,” said trainer Joseph O’Brien.

Bookmakers got the best of the opening juvenile maiden hurdle as the 33-1 shot Leagan Gaeilge made a winning debut over jumps for trainer Brendan Duke.