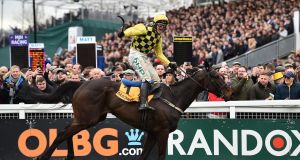 Townend banished the memory of his infamous blunder on Al Boum Photo at Punchestown last year when the partnership crashed out through a wing at the last fence with a Grade One race at their mercy.

However, his dramatic manoeuvre saw the horse smash through the wing and take out another rival. One of the most inexplicable incidents ever seen on a racecourse earned Townend a 21-day ban for dangerous riding and a torrent of criticism.

The Cork man has rallied from that blow to such effect that he’s in line to win a second Irish jockeys’ championship this season.

But the emotional impact of his notorious mistake was stamped all over the 25th Irish-trained success in steeplechasing’ most coveted prize.

If the fairytale result so many craved for the favourite Presenting Percy never liked look happening, a storybook finale still occurred as Al Boum Photo strode up the famous hill two and a half lengths clear of his compatriot Anibale Fly to win at 12-1.

Townend was all but overcome in the immediate aftermath. He managed to thank Al Boum Photo’s owners, Marie and Joe Donnelly, for sticking by him after Punchestown, as well as Mullins, for whom he’s ridden as No 2 jockey for a decade.

However, quizzed about Punchestown, all kinds of emotion appeared to be wrapped up in his reply – “I think I owed it to the horse.”

It almost seemed like fate as Al Boum Photo and Townend were reunited for the first time since and this time enjoyed a dream, though eventful, race.

Ruby Walsh’s pick of Mullins’s four runners, Bellshill, made several early blunders and was pulled up on the first circuit. By then, Mullins’s Kemboy had already finished for the day, having unseated his jockey at the first.

But even before the first circuit was completed fortune looked to be heavily against Mullins’s ambitions to win a Gold Cup after 20 years of frustration. His fourth contender, Invitation Only, took a crashing fall at the 10th fence that left the horse with fatal injuries.

Runner-up six times, it looked like Cheltenham’s most successful trainer might never win the festival race that counts most.

“I sort of resigned myself to never winning a Gold Cup. Certain jockeys may never win the feature race of their lives, like the Grand National or the Champion Hurdle. I thought maybe I’m not going to be lucky,” he said.

If it’s hard not to think such a famously competitive individual might have found it an all but intolerable niggle to have such a glaring gap in an otherwise glittering CV, now he’ll happily never need to know. Townend, too, doesn’t have to wince anymore when Al Boum Photo’s name is mentioned.

“I can’t believe it. It’s the Gold Cup, there’s only one a year and I never dreamed I’d win it,” he beamed. “Like any race, when you’re going well, it’s so simple. And I’m so grateful to give Willie his first Gold Cup.”

The winner was always travelling conspicuously smoothly in a strongly run stamina test in testing conditions.

Last year’s winner Native River towed the field to the straight but was quickly swallowed up as Bristol De Mai briefly threatened to serve it up to Al Boum Photo.

It was left to last year’s third Anibale Fly to launch the final challenge at Al Boum Photo but the JP McManus-owned runner had to settle for the runner-up spot this time.

McManus’s disappointment at that was nothing compared to earlier on the card when the owner’s bright young star Sir Erec had to be put down after sustaining fatal injuries in the JCB Triumph Hurdle.

McManus and Sir Erec’s trainer Joseph O’Brien got some consolation in the final race with a win for Early Doors.

It was a 14th Irish-trained winner of the week which meant a tie with the cross-channel team.