‘If you have a horse good enough, you will put it through,’ says trainer Terence O’Brien 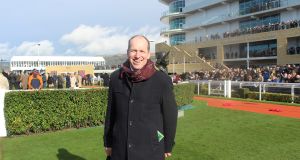 Horse trainer Terence O’Brien from Carrigtwohill, Co Cork, in the winners’ enclosure after his horse Articulum came third at 25-1 in the Arkle Chase. Photograph: Simon Carswell

If a horse trainer has a contender strong enough for Cheltenham, complications and increased costs caused by Brexit will not deter the small-operation trainers from bringing horses to England.

This was the view of Terence O’Brien, horse trainer from Carrigtwohill, Co Cork, who in his first time at jump racing’s top race meeting scored a third-place finish with Articulum in Tuesday’s Arkle Chase.

O’Brien was one of the low-key Irish success stories of Cheltenham 2019.

“I can’t imagine that that will stop me,” O’Brien said about potential delays at the ports and additional paperwork and taxes for bringing horses to the UK.

“If you have a horse good enough, you will put it through the shit or whatever it is.”

Economies of scale mean the big trainers and regular winners at Cheltenham such as Willie Mullins, Gordon Elliott and Henry De Bromhead will continue to transport their dozens of horses to the English Cotswolds every year but there are fears that higher costs after Brexit might deter the small training yards.

In the past seven years there has been a growing concentration of horses in training at the biggest operations. Consultants Deloitte found in a recent report for Horse Racing Ireland that in 2012 the 10 trainers with more than 100 horses had 1,700 horses. By 2016, 12 trainers in this bracket had 2,375 horses.

He first held his trainer’s licence in the 1990s and renewed it again in 2007. He was thrilled this week to be competing against the big trainers at National Hunt’s answer to the Olympics.

“Willie has 60 horses here, Gordon has 45, Henry has 20 and I have one. It is fabulous just to be involved. It is a great buzz. I am sure I can feel my phone ringing here,” he said in the winners’ enclosure on Tuesday after his horse placed at odds of 25-1.

The trainer said he was watching the week’s political developments at Westminster around Brexit and keeping an eye on the value of sterling given that he buys and sells in the UK.

O’Brien was optimistic that the politics would find a way through to avoid disruption to symbiotic Irish and British horse racing and breeding industries.

1 Gary Neville in Qatar an exercise in semi-journalism
2 Six Nations: Ireland are contenders but England still the team to beat
3 Mike Catt hopes to have Irish backs purring in Six Nations
4 In Donegal Michael Murphy is seen, simply, as a godsend
5 Owen Doyle: Creeping professionalism of schools rugby a threat to the game
Real news has value SUBSCRIBE