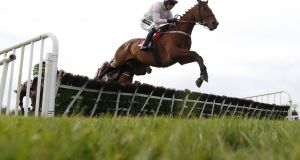 Bapaume could mount a challenge in the feature on day three at Cheltenham. Photo: Alan Crowhurst/Getty Images

The romantic in Noel Meade might have preferred that Road To Respect returned for another tilt at the Gold Cup tomorrow but his stamina for that test, especially on softened ground, is questionable and this looks a better option. Things have not gone smoothly since a facile Down Royal win in November but his last two defeats at Leopardstown are excusable, stumbling badly at Christmas and unsuited by making the running last time. This bigger field and likely strong pace should be much more his bag.

Faugheen is the main hope for the Mullins-Ricci axis according to the betting but runners his age tend to struggle in the championship events at the Festival, Moscow Flyer in 2005 the last horse older than 10 to win such a race. Their other runner Bapaume is more of an up-and-comer and is best in the spring with his form behind Presenting Percy last time giving him every chance of making the frame.

Though lacking the listed and graded form of some in this field, Emily Moon looked an improved mare last time at Naas where a change of tactics saw her to good effect. For the first time in her five starts, she was allowed to make the running which suited much better than being restrained amongst horses and while executing that approach will be tougher at this level, she has the scope to do better on soft ground.

1 Ireland v Scotland: Doris’ day as Caelan set for first cap
2 In mourning Kobe Bryant mourn the bad as well as the good
3 Gerry Thornley: Temple Carrig are the true schools rugby story of the season
4 How much do hotel prices rise for major sports events?
5 Men in Black: The referees for Ireland’s Six Nations games
Real news has value SUBSCRIBE