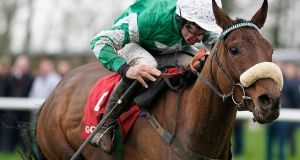 The Cheltenham Gold Cup favourite Presenting Percy has been tagged a ‘Scarlet Pimpernel’ type figure but his local Galway track is shortly set to see even more of him.

Having missed a series of winter engagements over fences due to quick ground conditions, the Pat Kelly-trained star has had just a single outing this season, winning over hurdles at Gowran in January.

No horse since Easter Hero 90 years ago has won the Gold Cup without having run over fences the same season.

Despite that, Presenting Percy continues to top the Gold Cup betting at a general 7-2 although his position is increasingly under pressure from the English star, Clan Des Obeaux, winner of the King George at Christmas.

Last Saturday Presenting Percy’s unorthodox preparation for steeplechasing’s ‘Blue Riband’ took another twist when it was revealed Kelly took him from his Athenry yard to school over fences the ‘wrong’ way round at Galway.

The fences on the right-handed track were turned around to help replicate a Cheltenham situation.

It was a second time for Presenting Percy to school at Ballybrit like that and on Tuesday his owner Philip Reynolds confirmed the horse will get a third opportunity to get his eye in over fences prior to next week’s festival.

“We’ll go back to Galway either tomorrow or the next day. He came out of Saturday very well and we’re delighted with him. I’m not concerned about him not having run over fences this season. He has done plenty of schooling and, touch-wood, he jumps very well.

“He’ll have at least two more pieces of work and Michael [Moloney – Galway racecourse manager] has promised he’ll leave the fences that way round until the end of the week!” he said.

Presenting Percy’s single race this season, combined with Kelly’s media-shy profile, has prompted ‘Pimpernel’ jokes but also concerns about whether or not he can win the Gold Cup off such an unconventional preparation.

Reynolds conceded that a lack of a run over fences has resulted in a certain improvisation being necessary. But he is happy the Galway gradients will help the horse be ready for Friday week’s big race.

“The hill there is as tough as any you’ll find at Cheltenham so you couldn’t really have it much better, thanks to Michael and the groundsmen in Galway,” he added.

One horse that has failed to make Cheltenham is Samcro who will miss next week’s Stayers Hurdle. Trainer Gordon Elliott has run out of time after the horse was discovered to have had a lung infection earlier in the season.

“He’s in very good form and I’m pleased with how he’s been doing his work. However Cheltenham is just going to come a week or two too soon,” said Elliott on Tuesday.

“At the best of times you’ve got to be absolutely spot on for Cheltenham and while Samcro is in very good shape, myself, Michael and Eddie [O’Leary] feel the right thing to do by the horse is to give him more time.

“There is every chance he could run again this season and there are a range of suitable races for him at those meetings so hopefully we’ll see him back in action next month,” he added.

One horse that is on track for the festival, and the Ryanair Chase, is the former Grade One winner Coney Island.

After a recent racecourse school, his trainer Eddie Harty confirmed: “All went well, we’re very happy and we move on and try to get him there next week. I’m happy and fingers crossed. I just want a clear run with him.”

One Grade One novice performer set to skip next week’s Cheltenham action is Kaiser Black. Instead the Pat Doyle-trained horse, runner-up to Le Bague Au Roi at the Dublin Racing Festival, could take in this Sunday’s feature at Naas en route to other festival options at Aintree and Punchestown.

Kaiser Black is one of 13 left in the Naas Directors Novice Plate after the latest forfeit stage.

Also featuring in the Grade Three event is Tom Taaffe’s Riders Onthe Storm, a winner at Punchestown last month, and as low as 8-1 in some ante-post lists for the Close Brothers Novice Handicap at next week’s festival.

Sunday’s €100,000 feature is the Toalsbet Leinster National for which Gordon Elliott has 14 of the 36 remaining entries.