Cheltenham Day Four: Race times, tips and how to follow 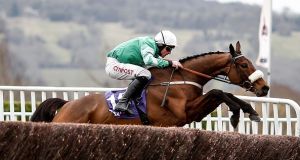 On day four of the Cheltenham festival the Gold Cup is without doubt the big draw. The entire festival, and jump racing’s, blue riband event is over three and a quarter miles and 22 fences. Before the stamina-sapping finish up the Cheltenham hill.

Here is everything you need to know ahead of Friday’s racing.

The going remains good to soft.

The weather for Friday is set to be cloudy and drizzly with some strong winds which will ease as the day goes on.

Virgin Media One and ITV have been showing the first five races on the card each day, with only subscription service Racing TV showing the full card.

But do not despair! You can follow every race and see all the results on the Irish Times liveblog from 12.30pm.

And the big race of the day?

Presenting Percy may well be the most talented horse in this Gold Cup, but hasn’t raced over fences in a year. It’s 90 years since Easter Hero won the Gold Cup off that kind of preparation and he’d had a few runs over hurdles. Presenting Percy has had a single run over flights.

Despite being a year younger than his Irish rival, Clan Des Obeaux can boast a King George victory this season as well as a super-smooth prep last month.

Should another of them, Al Boum Photo, emerge on top it would be a perfect redemptive outcome for his jockey Paul Townend who infamously pulled him up at Punchestown last year when looking set to win (read Brian O’Connor’s Gold Cup preview here).

Simon Claisse, our Clerk of the Course gives us a going update this morning.

Who should I back?

Meanwhile Brian O’Connor (who correctly selected the winners of each of Wednesday’s last four races, and another two yesterday) fancies the following: