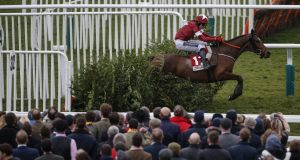 Generally speaking, Irish racing fans aren’t partial to the more sentimental excesses that some racehorses can provoke in Britain.

But Wednesday’s Cheltenham Irish ‘banker,’ Tiger Roll, is increasingly becoming a popular exception. So if he wins at the festival for a fourth time in the Glenfarclas Cross-Country Chase extreme weather conditions may get employed as an excuse for a tear or two.

Tiger Roll was memorably described as a ‘little rat of a thing’ by his owner Michael O’Leary after making light of his lack of size to win last year’s Grand National.

The Ryanair chief executive’s heavily disguised affection is in contrast to some of the more anthropomorphic extremes provoked in the past by the likes of Desert Orchid and Red Rum.

Adulation of ‘Dessie’ could get notably feverish: the ‘Rummy’ story sometimes veered towards the mawkish.

O’Leary can never be described of that. But his reference to Tiger Roll’s diminutive stature seems to echo at least some of the popular appeal Red Rum used to hold.

Like the legendary triple-National hero, Tiger Roll is a flat bred horse without the size usually associated with steeplechasers. Yet he makes up for it with notable grit and determination.

That grit took the butty bay gelding to a famous National victory in 2018. He is favourite to become the first horse since ‘Rummy’ to win it back to back in Aintree next month.

Of course Red Rum’s ‘little guy’ narrative was aided by not having a billionaire owner or being trained by a major figure like Gordon Elliott.

Tiger Roll’s story hasn’t got that. And no doubt plenty hard chaws would fling themselves off the Cheltenham stand than admit to anything but punting considerations about a horse who’s been a lucrative investment here three times already.

However the response to Tiger Roll warming up for today’s cross-country event with a shock 25-1 success over hurdles at Navan last month told of his singular popularity with the Irish racing public.

That it indicated he will carry ‘banker’ status for many in the Cross Country was only part of the story. This is a horse that seems to have captured public affection as well as admiration.

Eddie O’Leary, who runs his brother’s Gigginstown Stud operation, is few people’s idea of a sentimentalist either. But he’s unabashed about his fondness for the little horse.

“He’s a wonderful, wonderful horse, and the complete over-achiever. He never knows when he’s beaten and keeps surprising everybody,” O’Leary says. “Mind you, he’s a cranky oul’ bugger in his box. You wouldn’t want to go at him the wrong way!”

Bought by O’Leary after winning his first ever race for English trainer Nigel Hawke, the horse bred on the banks of Lough Derg in Co Tipperary by vet, Gerry O’Brien, wasn’t weighed down by huge ambitions.

“We thought he mightn’t be very good but could be a Fred Winter type horse. He went on to win the Triumph Hurdle – total overachievement,” O’Leary recalls.

“Then something happened to him the following November at Down Royal. He got pulled up at the last with a broken pelvis. But when he got back to the stables he was sound. There was no fracture. But something fell off him that day, I think.

“After he recovered from that he was tipping around and ran away with the four-miler [National Hunt Chase] when he head-butted every fence and kept looking around at Lisa [O’Neill] asking ‘are you okay there, pet?’ Again, total overachievement.

“But people forget that around that time he’d mostly stopped racing. He was finished with the game, pissed off with it, didn’t want to know. He was the furthest thing away from a racehorse,” he adds.

Such is the depth of talent he owns, even Grade One winners that would be pampered as pets for life by most other owners get moved on. It’s select horses such as the Gold Cup winners War Of Attrition and Don Cossack that get luxury retirement in Gigginstown.

As a last resort to rekindle Tiger Roll’s enthusiasm he was entrusted to jockey Keith Donoghue who took him hunting. The variety of the challenge seemed to work. That made the cross-country option a lot more attractive.

Success here last year ended up as a prelude to National glory. But one wouldn’t have happened without the other.

Purists get sniffy about Cross-Country races, often regarding them as novelty events. The Cheltenham version however has been key in rejuvenating Tiger Roll.

“He’s amazing because he takes everything so low and he’s never fallen. You’d think he’d fall at the first in a National but he’s so accurate and such a smart little horse. A horse fell in front of him at Bechers last year and he ducked to the side so fast,” he adds.

It’s the sort of sentiment that mightn’t register against some syrupy extremes of the past but Tiger Roll has clearly carved out a special place for himself in even professional hearts.

Elliott admits the little horse is a favourite. Davy Russell has been known to wax lyrical too. And his owners concede Tiger Roll’s already earned a retirement spot in Gigginstown.

“There’ll be a statue made of him!” Eddie O’Leary says.