Presenting Percy ‘in good form’ ahead of Punchestown return 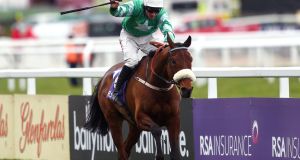 The Pat Kelly-trained eight-year-old looked every inch a Gold Cup horse in the making when claiming his second Cheltenham Festival success with a brilliant display in the 2018 RSA Chase.

And although last season did not go entirely to script, it is perhaps a measure of where he is held in the public’s affections that he was sent off favourite for the blue riband in March — despite lining up off the back of a solitary run over a hurdles in January.

Presenting Percy could only finish eighth at Prestbury Park, after which Reynolds revealed his pride and joy was suffering from a back problem and had bone bruising — but he is hopeful those problems are behind him.

“Percy is in good form and he’s done everything Pat has asked of him. I’m looking forward to seeing him run again,” said Reynolds.

“This time last year Percy was the 6-1 favourite for the Gold Cup and this year he’s 16-1, which is maybe a better reflection of where he should be. There’s less pressure, which isn’t a bad position to be in.”

Presenting Percy features in a nine-strong field, with the standard set by last year’s winner Min.

Reynolds added: “It’s a hot race. I didn’t expect Willie to declare as many as he has, but however many he’s running, Min is the one we all have to beat. We always expected Min to run here, so from that point of view not a lot has changed.

“We’re hoping Percy will run a good race, but until we get Sunday out of the way it’s difficult to make any plans.

“He’s in the Savills Chase at Christmas, but we might be looking at Ludlow rather than Leopardstown after this weekend!”

Assessing the chances of the quartet, Mullins junior said: “Min won the race last year and seems in very god form at home, so we’re hoping he can follow up.

“Real Steel has shown a preference for going right-handed, which means options are limited. He has the benefit of a run, which is obviously an advantage, and this will tell us whether he’s a proper Grade One horse or not.

“Voix Du Reve beat Real Steel at Fairyhouse in the spring, but this is his first run of the season and I think he might come on for it more than the others.

“Duc Des Genievres was beaten a long way on his first run of the season in Navan, but he always seems to take a run or two to find full fitness, so we’re hoping for an improved performance on Sunday.”