Royal Rendezvous impresses on debut over fences at Thurles 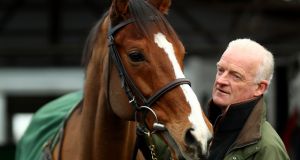 Willie Mullins with Faugheen: “I think Faugheen will run in the Grade One at Limerick over Christmas. He is a previous winner at the course and that would look the right thing to do.” Photograph: James Crombie/Inpho

Royal Rendezvous could step up to Grade One level on his next appearance following a dominant display on his debut over fences at Thurles.

The Willie Mullins-trained seven-year-old won three races in succession between August and October of last year, but was pulled up on his return from a break in a top-level novice hurdle at the Punchestown Festival.

Making his seasonal reappearance and chasing bow, the seven-year-old was the 8-11 favourite for the Killinan Beginners Chase and jumped accurately before readily pulling three lengths clear in the hands of Paul Townend.

Mullins said: “He looks a natural jumper and the couple he met wrong he corrected himself and Paul was very happy with how he did it.

“Looking at his performance there, I could be sticking to the minimum trip and we’ll look at Christmas next. The only two-mile race is the Grade One at Leopardstown, unless there’s a winners of one after that.”

The champion trainer has already unleashed several exciting chasing prospects this season – not least the brilliant former champion hurdler Faugheen, who survived an almighty blunder to win on his fencing debut at Punchestown earlier in the month.

Mullins must now decide how to split his aces over the festive period.

He added: “We’ll try to split them up. There’ll be Royal Rendezvous, Cash Back and Tornado Flyer who are all in that two- mile bracket.

“Tornado Flyer might go for a winners’ race at Navan in two weeks’ time and that’ll spit things up for the Grade One at Leopardstown.

“I think Faugheen will run in the Grade One at Limerick over Christmas. He is a previous winner at the course and that would look the right thing to do – and he will probably have something else going with him.”

Mullins went on to complete a treble on the afternoon.

“It was a good return for both fillies [Elfile and My Sister Sarah] and they both jumped well. We’ll look for fillies’ and mares’ contests for them over Christmas and in the new year,” said Mullins.

“Fan De Blues looked as big as a bull when I saw him with his number cloth on and he did well to do what he did over a short trip. He is a real chaser, but is only four and I’ll keep him as a novice hurdler and we will probably go up in trip with him as well.”

Bought for €193, 000 after winning his only start in the point-to-point sphere, the four-year-old was a 6-1 shot for his debut under rules and showed a good attitude to score by a shade over a length in the hands of Robbie Power.

“He couldn’t have done it any easier and he is still a big, raw baby,” said Morris.

“He is my type of horse and I couldn’t be happier. I’m in no major hurry with him.”