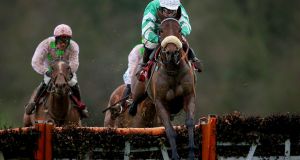 Gold Cup dreams for Presenting Percy were dashed at Cheltenham last March but his eagerly anticipated return to action in Sunday’s John Durkan Chase at Punchestown will be a crucial test of whether or not they still exist.

The hugely popular dual-Cheltenham festival winner started favourite for last season’s Gold Cup only to fade to eighth behind Al Boum Photo, after which he was found to be lame.

At one point his owner, Philip Reynolds, feared the worst, with concerns about a possible fracture in the horse’s near-hind leg. Later it was discovered Presenting Percy had bad bruising and the Pat Kelly-trained star spent the summer recuperating at his owner’s property.

Last season’s freakishly dry winter restricted Presenting Percy to one run over hurdles prior to Cheltenham. There’s no repeat of that this time however and he is set to return to action over fences in Sunday’s €85,000 Grade One feature.

A total of 14 entries remain in the Durkan after Tuesday’s forfeit stage, including both last year’s winner Min and a potential cross-channel raider in Waiting Patiently. However most focus is likely to be on Presenting Percy’s comeback.

“It will be a proper test and give us an idea of where we’re at with him. Either the bubble will burst on Sunday or maybe we’ll start dreaming again. We’ll see how he fares. It’s really hard to say but we can only hope,” Reynolds said on Tuesday.

The fact Presenting Percy is likely to line up at all will feel like a result after initial post-Cheltenham anxiety that his career could be over – or worse.

“It’s been a long nine months and it will probably be a longer next five days,” the owner admitted.

“He was lame after Cheltenham and we sent him to Gerry Kelly [vet] in Fethard where it was found he basically had bone bruising. I took him home for the summer and he went back to Gerry before going to Pat in August.

“Touch wood everything is good. I think Pat wants to see him back as much as me just to see where we are. But everything that’s been asked of him he’s done it. He’s ready to run. He’s well and did his last piece of schooling at the weekend,” Reynolds added.

Asked about a tilt at the 2020 Gold Cup – for which Presenting Percy is as low as 12-1 in some ante-post lists – being an option this season, the businessman replied: “We’ll find out on Sunday. It’s not his trip [two and a half miles] and I could argue Punchestown isn’t exactly his track either. I think he’s only won once from six starts there.

“But it’s going to be a good test. Min will show up and Willie [Mullins] will have one or two others, as will Gordon [Elliott]. It will be a proper test and tell us a lot.”

Presenting Percy missed last year’s Durkan because of the ground being unsuitably quick but the going at Punchestown is currently ‘soft’.

A rock-solid Gold Cup benchmark could also be in the Durkan as Anibale Fly, placed in the last two renewals of steeplechasing’s ‘Blue Riband’ has the option of lining up.

“The plan is to do a piece of work with Anibale tomorrow [Wednesday] morning and see how he goes there but he’s in great form,” said his trainer Tony Martin.

“He’s working away nicely at home and I think he’s ready to run but we’ll just give him a spin in the morning and go from there.

“He has the option of the Durkan on Sunday and he ran well over that trip last season so it wouldn’t be a worry starting him there. Long term the aim would be to get him back to the Gold Cup or a Grand National,” he added.

Shattered Love was runner-up to Min last year and won her last race in good style at Clonmel.

Trainer Elliott reported: “I think the Clonmel race has done her the world of good and if she comes back to the form she was in this time last year she must have a chance of running well.”

Initial bookmaker reaction on Tuesday was to make Min an odds-on favourite to emulate Djakadam (2015-16) and Native Upmanship (2000-02) and become a dual-Durkan winner.

Presenting Percy was made a 9-2 next best ahead of Shattered Love and another Mullins entry, Real Steel.

They include the progressive Cilaos Emery as well as the JP McManus-owned Great Field. McManus may also be represented by last month’s impressive Fortria winner, Ballyoisin.