Colt joined by stable companion Mount Everest in contest due off at 5.40 Irish time 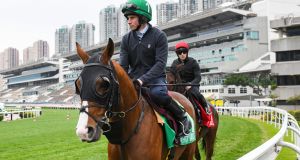 The colt is the first “Blue Riband” winner to take part in Hong Kong’s international races which are traditionally the final major Group One date of the year.

The mile and a half Vase is the first of four top-flight races run on Sunday morning with Anthony Van Dyck (Ryan Moore) joined by his stable companion Mount Everest (Wayne Lordan) in a contest due off at 5.40 Irish time.

Willie Mullins’s mare True Self has travelled from a lucrative spell in Australia to contest the Vase as well but it is O’Brien’s older mare Magic Wand who epitomises the international element to Sunday’s lucrative card.

She began 2019 with a second in the Pegasus World Cup in Florida in January, then raced in Dubai in March before returning twice more to the US during the summer.

The last of three races in Australia finally yielded a Group One victory in the Mackinnon in Flemington last month and now she will try to emulate Highland Reel who gave O’Brien two Vase wins in 2015 and 2017.

The last of those yielded the trainer a world record 28th Group One in a calendar year.

Magic Wand is one of just eight lining up in the mile and a quarter Cup event due off at 8.10 where her opposition includes the Hong Kong Derby winner Furore.

The Carnival brings to a close another successful Group One campaign for O’Brien who has secured 16 top-flight victories to date.