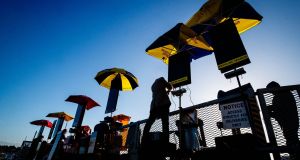 Bookmakers might not take bets on every race at Punchestown on Tuesday due to a dispute with the racecourse’s organisation and Horse Racing Ireland. Photograph: Oisin Keniry/Inpho

Bookmakers have rowed back on the threat of ‘strike’ action at Punchestown’s fixture on Tuesday although they may not bet on every one of the seven races.

On Sunday the Irish National Professional Bookmakers’ Association (INPBA) said a service couldn’t be guaranteed at upcoming race meetings due to a dispute with the racecourse’s organisation and Horse Racing Ireland (HRI).

That has arisen on the back of widespread bookmaker unhappiness about various race-planning issues as well as charges imposed on layers in relation to poorly attended midweek fixtures in particular.

On Monday the INPBA chairman Ray Mulvaney said there had been positive reaction from various industry stakeholders to their weekend statement but that he hadn’t heard from either HRI or the Association of Irish Racecourses (AIR).

It leaves open the prospect of Tuesday’s fixture having as much focus centred on the betting ring as the track.

“There will be bookmakers in Punchestown. Whether we work all the races or not remains to be seen, regarding if AIR come back with a mediation process so we can move forward.

“We want to serve the racetracks but our voice needs to hard,” said Mulvaney.

The charges issue, which means bookmakers pay five times the admission price to stand in the ring, appears to be particularly contentious.

The INPBA wants to negotiate that in the light of declining attendances at midweek meetings which in turn has contributed to falling bookmaker turnover.

“If AIR do come back, our members will want to see what they come back with: so ‘watch this space’ for the want of a better expression,” Mulvaney added.

Dual champion flat jockey Donnacha O’Brien, who announced his retirement from the saddle on Sunday, expects to have his licence to train by the New Year.

The 21-year-old Classic-winning rider has confirmed he will train out of the Longfield yard near Cashel that David Wachman operated from until his own retirement.

“There’s a bit of paperwork to fill out but hopefully I’ll have a licence in the next few weeks or maybe in the New Year might look more likely.

“I’ve a small team of horses to look forward to and I’m looking forward to getting stuck in,” O’Brien reported.

Bought for £410,000 after winning a point-to-point, JP McManus’s runner won a bumper at the course in May and could be forward enough to beat a three-pronged attack from Willie Mullins.

1 No further players to be called up to Ireland squad to face Georgia
2 Gerry Thornley: Ireland don’t want to box themselves into a corner
3 Kevin McStay: Maybe a knockout All-Ireland Championship is the long-term solution?
4 Former France and Stade Francais winger Dominici has died aged 48
5 New Killarney athletic track another jewel in the Kingdom’s crown
Real news has value SUBSCRIBE