‘We all want to win. I understand, and he understands, it’s not easy’ 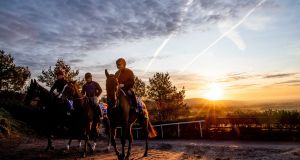 The season of goodwill is coming but Joesph O’Brien briefly tried to affect a more grinchy pose on Monday.

“I would never talk to him. I haven’t spoken to him since November. He’s no good to me anymore!” said the 26-year-old trainer and former champion jockey.

‘He’ is his 21-year-old brother Donnacha, who retired from the saddle as champion jockey last week and is the newest member of racing’s greatest dynasty to try his hand at this training lark.

It’s only three years since big brother acknowledged too that a six-foot frame isn’t sustainable for a flat jockey, opting instead to follow in the heels of his father, who just happens to be the most successful trainer in the world.

It is testament to the steely resolve obvious from a riding career that contained over 500 winners, including 10 Classics, that the meteoric success he immediately enjoyed surprised no one.

From the yard originally created by his grandfather Joe Crowley, and from which both his mother and father were champions, he has expanded to become the second most successful Flat yard in the country, behind his father’s Ballydoyle operation, while also operating successfully over the jumps.

A month ago O’Brien became just the second person to both ride and train a Breeders’ Cup winner when Iridessa was successful in the Californian climes of Santa Anita.

More recently a hat-trick at Fairyhouse’s ‘Winter Festival’ on Sunday meant a best annual tally of winners with 176 in 2019 to date. All of them emerged from the Owning Hill yard that on Monday felt a long way from LA and Melbourne.

Zero degree temperatures and a spectacular view of the Comeragh mountains from almost a thousand feet up was the scene for the launch of Leopardstown’s Christmas Festival.

O’Brien dominated last year’s St Stephen’s Day feature when Le Richebourg led a stable one-two, and so got the dubious privilege of a media invasion.

Always a safe pair of PR hands – usually there’s evidence of how the apple hasn’t fallen far from the tree in terms of neutral public utterances – on home ground there was enough of a thaw to suggest a more playful side too.

Donnacha intends to start small with about 25 horses for the Flat in 2020. Rumour has it that might be just a 10th of the numbers Joseph oversees. He makes a good droll when quizzed on it.

Growing up in the gaze of public fascination with such incredible achievement among a single family understandably breeds caution and ensures any future sibling rivalry won’t turn ‘Wibbling’.

But the senior O’Brien brother does acknowledge there will be rivalry.

“There always is. We all want to win. I understand, and he understands, it’s not easy. We get on very well, always have done, and that won’t change ,” he says. “But I’ll have more runners so I’ll have a better chance of winning than he will!”

O’Brien says that when it comes to advice both he and his brother are always only a phone call away from their father, Aidan. But he also stresses how each is his own man.

“We talk all the time but Donnacha makes his own decisions. You can’t take advice for a huge career change from anyone. That’s a decision you have to make yourself, whatever job you have.

“Donnacha knows how he struggled with his weight and he knew when the time was right. His [weight issues] were worse. He’s taller than me and stronger built. He was considerably more dedicated than I was and he was a good bit better rider too, unfortunately,” he grinned.

Fakir D’oudairies was his latest top-flight winner in Sunday’s Drinmore where Samcro exited at the second-last fence.

The pair are among 16 entries left in Leopardstown’s St Stephen’s Day feature, although O’Brien playfully went off-message by suggesting Limerick’s Grade One highlight could be an alternative option.

The preliminary entries for all seven Grade One races at Leopardstown were issued on Monday and perhaps the most notable revolved around Sunday’s unbeaten Royal Bond winner Envoi Allen.

As expected the novice is among the list for the Paddy Power Future Champions race but his trainer Gordon Elliott has also left him in the newly-titled €125,000 Matheson Hurdle on the final day of the festival.

That opens up the possibility of a clash with senior opposition, maybe with a long-term view towards checking out Envoi Allen’s credentials for the Champion Hurdle.

Also among the dozen left in the race are the Hatton’s Grace heroine Honeysuckle and last year’s winner Sharjah.