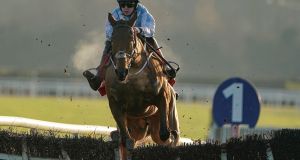 It was a case of a new queen ascending to the throne of Fairyhouse’s Bar One Hatton’s Grace Hurdle when the unbeaten Honeysuckle landed Sunday’s ‘Winter Festival’ feature in style.

The youngest of the six runners justified 9-10 odds with a nine length defeat of Bacardys while the former triple-Hatton’s Grace winning mare Apple’s Jade had to settle for third place this time.

The sense of youth elbowing the established order aside was underlined by bookmakers slashing Honeysuckle to as low as 6-4 favourite for the OLBG Mares Hurdle at Cheltenham in March.

It was a first Grade One victory at the ‘Winter Festival’ for both trainer Henry De Bromhead and jockey Rachael Blackmore although Honeysuckle was confirming her rare fondness for the track.

Five of her six career victories have been at Fairyhouse and Blackmore commented afterwards: “I hope she loves the place across the water as well!

“She’s very special and this was a big step up today. Sitting on her back is a privileged position to be in.”

The sky does appear to be the limit for racing’s new star mare who also features in betting lists for both the Champion Hurdle and the Stayers Hurdle at Cheltenham.

De Bromhead, however, suggested the mares event is the obvious option.

“She was brilliant and even I could enjoy it a bit. I couldn’t believe it when Rachael took a pull on her turning in considering the calibre of race she was in,” he said.

“This is why we are all in it for a special mare like her. She loves it here at Fairyhouse and we better go and find out now if she can go left-handed.

“The mares hurdle at Cheltenham will obviously be very high on her agenda and we might wait and give her a prep run before that,” De Bromhead added.

Given her impressive size and scope there were those prepared to think even further ahead and ponder Honeysuckle might ultimately prove to be a ‘honey monster’ over fences although the Co. Waterford trainer wasn’t having it.

“She’s grown and developed over the summer and is still only five,” he said.

“She jumps a fence lovely in loose schooling but at the moment we’re just taking one race at a time.”

For once Willie Mullins was out of luck in all three of the Grade One ‘Winter Festival’ races but got some compensation with a one-two in the €100,000 handicap hurdle.

The JP McManus-owned Janidil justified 3-1 favouritism with a gutsy defeat of his stable companion Buildmeupbuttercup who travelled like a likely winner for much of the race.

Mullins, who also saddled the fourth and fifth, suggested jumping was crucial in the outcome.

“It was a great run for a novice and he (Janidil) is improving all the time. I just hope there’s more in him and the second mare ran a great race. She just has brush up on her jumping.

“We’ll look forward to Christmas with all of them. The winner could go into graded company although I don’t think I’d like to be taking on Envoi Allen just yet!” he said.

The result helped McManus to a hat-trick of winners on the programme as in addition to Fakir D’oudairies’ Drinmore victory, Killer Miller scored at 10-1 in the Porterstown Handicap Chase.

It was four years since the winner’s last success although he’d run only half a dozen times since.

“He’s had plenty of problems and hasn’t run that many times even though he’s been around a long time.

“We couldn’t get him right all last season and I thought when he went back to Martinstown we might not see him again because he looked terrible.

“They found that he had an infection and he back looking a million at the end of the summer,” said Killer Miller’s trainer Noel Meade.