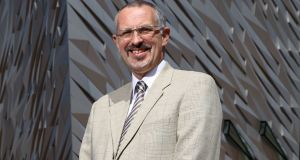 The man credited with launching the Belfast Titanic Centre in Belfast has been tasked with steering the future of Leopardstown racecourse as its new chief executive.

Englishman Tim Husbands will take up the position at the Horse Racing Ireland-owned track in mid-January, replacing Pat Keogh who has been juggling positions at Leopardstown and the Curragh since the summer.

Husbands has held various prominent roles in the Northern Ireland including managing director of Belfast’s Waterfront Hall and the Ulster Hall before becoming chief executive of Titanic Belfast.

That is Northern Ireland’s biggest single capital investment in tourism and has attracted three million visitors from over 145 countries. Husbands was awarded an MBE for his work in helping to regenerate the Titanic Quarter.

Husbands left that position almost two years ago and became CEO at the Westport House complex in Co Mayo. He stepped down from that position after just eight months.

“As CEO he will bring an extremely high level of experience in event management and tourism to Leopardstown and is a strong addition to the very innovative team,” said HRI’s boss, Brian Kavanagh on Friday.

“Not surprisingly when the role became vacant it attracted a strong level of applicant both from inside and outside the racing industry,” he added.

Dublin’s sole racecourse is currently being redeveloped and in a statement its new chief executive said: “The redevelopment of the site, which will be completed next year, will significantly improve Leopardstown as a racing facility and outgoing CEO Pat Keogh deserves great credit.”

Husbands, who has worked on a consultancy basis recently, hasn’t been involved in racing before. His appointment carries echoes of former European Rugby boss Derek McGrath who was appointed CEO to the new Curragh in 2016. He left that post in July after a controversial tenure and was replaced by Keogh.

In other news, both Willie Mullins and Gordon Elliott are represented by leading fancies in the Ladbrokes Trophy – formerly the Hennessy – at Newbury.

Elliott has a first runner in the race in Galway Plate winner Borice while Mullins, a winner with Total Recall two years ago, has both Yorkshill and the fancied mare, Cabaret Queen. She won the Munster National at Limerick on her last start, the race Total Recall picked up en-route to his Ladbrokes triumph in 2017.