Ghaiyyath retired to stand as a stallion at Kildangan Stud 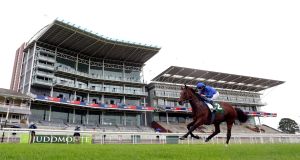 Ghaiyyath, ridden by William Buick, on the way to winning the Juddmonte International Stakes at the Yorkshire Ebor Festival in York, England. Photograph: David Davies/Getty Images

The world’s top-rated racehorse Ghaiyyath has been retired to stand as a stallion at Kildangan Stud in Co Kildare.

The son of Dubawi, a four-time Group One winner, had been in the running to line up at next month’s Breeders’ Cup but will instead begin a breeding career in 2021 at Sheikh Mohammed’s farm.

“It is obviously disappointing not to be taking him to the Breeders’ Cup but the exertions of a long season, which started in Dubai in January, were starting to show and the decision has been made to retire him,” reported the Godolphin trainer Charlie Appleby on Monday.

Ghaiyyath, bred by top Curragh trainer Dermot Weld, won three top-flight races this season, the Coronation Cup, the Eclipse and the Juddmonte International. After the latter event he was awarded an official rating of 130, the highest of any horse in the world.

However he was subsequently beaten on his only other start in the Irish Champion Stakes when losing to Magical.

“Ghaiyyath has had a fantastic career, winning nine of his 13 races. His high-class cruising speed and relentless style of galloping was a joy to watch and as I have said before, this year he came together both physically and mentally and looked the finished article,” Appleby added.

Joe Osborne, managing director for Godolphin in Ireland, said: “Ghaiyyath is a great addition to our roster. His superior ability as a racehorse combined with his looks and his pedigree will make him a sought-after option for breeders.”