Princess Zoe primed for tilt at Prix-Royal Oak at Longchamp 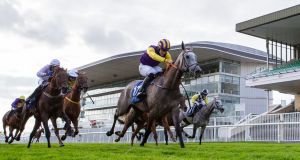 Princess Zoe recording one of her two wins at the Galway festival at Ballybrit. Next up for the popular mare is Sunday’s Prix Royal-Oak in Paris. Photograph: James Crombie/Inpho

Tony Mullins’s mare has been one of the stories of the season and completed a remarkable transformation from ordinary handicapper to Group One winner in the Prix Du Cadran earlier this month.

Star apprentice Joey Sheridan picked up a 12-day ban for his use of the whip on that occasion so Seamus Heffernan steps into the breach for this weekend’s €210,000 Group One highlight back at Longchamp.

The Royal Oak is the French equivalent of the St Leger and run at a trip of short of two miles, over half a mile shorter than the Cadran.

Princess Zoe’s Cadran success was a maiden victory at Group One level for Tony Mullins and he has already outlined an ambitious programme for 2021, possibly culminating in the Prix de l’Arc de Triomphe.

The grey is also favourite in some ante-post betting lists for the mares’ novice hurdle at the Cheltenham festival in March.

Mullins’s immediate focus though is on getting his stable star back to peak form just three weeks after her gruelling success at Longchamp last time.

“We’re very happy with the mare. All I can say is that in the back of my mind I’m thinking a two and a half mile race less than three weeks ago has to take its toll at some stage. But there’s no evidence at the moment so we’re set to go,” he said on Monday.

“We’ve done all our blood tests and everything is perfect. I would say the next one is the acid test – in the last 100 metres next Sunday,” Mullins added.

Heffernan had a workout on Princess Zoe at the weekend and the veteran rider was happy with her.

“Joey is obviously suspended which is a shame. He got six days for too many strikes with the whip and they doubled the penalty because it was a Group One which is a rule I couldn’t find in any rulebook anywhere. Anyway, that’s the way it goes,” Mullins said.

Princess Zoe has won her last five starts, the Cadran coming on the back of a Listed win at Galway and two victories at the summer festival at Ballybrit.

She is now officially rated on a mark of 110 compared to the 64 she ran off of on her Irish debut after arriving from Germany earlier this year.

The hugely popular five year old is already an evens favourite in some betting lists for Sunday’s race where she is likely to once again face France’s top stayer, Call The Wind.

He could finish only third in the Cadran on heavy ground but could be suited by the drop back in distance.

Ground conditions will be extremely testing for Tuesday’s Fairyhouse programme on the flat but that should be little trouble to Sunday’s Naas winner Poster Child in the final handicap.

She overcame a tardy start to win over ten furlongs at the weekend and can make light of a step up in trip if emerging well from that.

The exciting Captain Guinness makes his debut over fences at Tipperary on Tuesday.

Henry De Bromhead’s runner was brought down at the second last when still going well in the Supreme Novices Hurdle at Cheltenham in March and looks the star attraction in a deep looking field for the Beginners Chase.