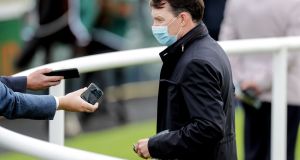 Aidan O’Brien has a record-equalling 10th Vertem Futurity success in his sights at Doncaster on Saturday. Ireland’s champion trainer is one shy of the legendary Henry Cecil’s 10 victories in the final Group 1 prize of the British flat season.

O’Brien has seven of the 18 entries in the mile highlight after Monday’s entry stage including Wembley, runner up in both the Dewhurst and National Stakes on his last two starts.

The last three Futurity winners have gone on to land the following year’s 2,000 Guineas including the Ballydoyle pair, Saxon Warrior (2018) and Magna Grecia (2019.)

Kameko scored in the race last year when it was switched to the all-weather at Newcastle after Doncaster was rained off.

Van Gogh, runner up to Godolphin’s One Ruler in Newmarket’s Autumn Stakes, could renew rivalries with that colt while O’Brien’s Group 3 winning filly Divinely is also among the 18.

The only filly to win the race in its 60-year history was the Paddy Prendergast trained Noblesse in 1962.

O’Brien, who landed the Dewhurst with St Mark’s Basilica over a week ago, saw two previous Futurity winners, Camelot (2011) and Kingsbarns (2012,) ridden by his son Joseph.

The latter is set to be represented on Saturday by the Champagne Stakes third State Of Rest. Other Irish interest might come from Jim Bolger’s Mac Swiney, winner of the Curragh’s Futurity in August.

Bolshoi Ballet was a four length maiden winner at Leopardstown on Friday but initial bookmaker reaction was to install One Ruler as a 5-2 favourite to emerge on top.

Trainer Roger Varian, who won the race in 2013 with Kingston Hill, supplemented Baradar into the Futurity on Monday. The son of Muhaarar won at York earlier this month, his second win in three starts.