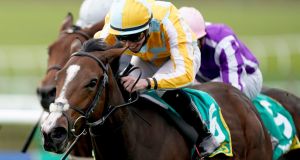 She was one of 11 horses trained by Aidan, Joseph and Donnacha O’Brien forced out of last weekend’s Arc card after traces of the prohibited substance Zilpaterol were found in their systems by a French laboratory the night before they were due to race.

Traces of the drug, which is used to fatten cattle in the US and banned in Europe, were initially detected in urine samples from racehorses in France and linked to a contaminated batch of feed from the Gain equine nutrition firm.

The O’Briens were among those using Gain feed and all trainers were immediately advised to switch to different products.

On Friday evening the Irish Horseracing Regulatory Board (IHRB) reported that more elective sample tests on Irish-trained horses that had been withdrawn from using Gain products for four days or more had returned negative.

Fast-tracked elective testing for connections worried about a post-race positive result for Zilpaterol has been available in Ireland and Britain. The drug testing for both jurisdictions is done at the LGC laboratory in Newmarket in England.

Questions have been raised as to how French testing procedures uncovered the positive results for Zilpaterol while no such positives were returned in Ireland and Britain with the suggestion that French testing standards are more stringent.

On Friday, an IHRB statement said: “Work continues across Britain, France and Ireland in conjunction with our respective laboratories to understand what has occurred in relation to the Gain feed contamination issue.

“While technical discussions are ongoing we are satisfied that the laboratories have been operating in accordance with the performance standards expected, with appropriate detection capability operating across all three matrices of blood, hair and urine for Zilpaterol.”

The IHRB also said investigations continue and that Federation of Horseracing Authorities have referred the matter to an expert scientific panel on prohibited substances.

On Friday there was also confirmation by Racing Victoria of negative tests for the drug in Australia on 10 horses sent to Melbourne’s spring carnival by Aidan and Joseph O’Brien.

The four horses from the Joseph O’Brien stable who tested free of Zilpaterol were Buckhurst, Master of Reality, Pondus and Twilight Payment.

Joseph O’Brien was fulsome in his praise for Pretty Gorgeous after Friday’s big race, pointing out how she had been in France to run in last Sunday’s Prix Marcel Boussac and had to return to Ireland before travelling to Newmarket.

“She has got a great constitution. She went to France last weekend and came back. The lad that rides her out at home said she had taken the journey well and was in good shape, and all credit goes to them as they said she would come here with every chance.

“I was quite worried myself and I had a good conversation with Mr [John] Oxley [owner] during the week and he was keen enough that if she was in good shape that we would take the chance and let her run.

“The way it worked out the French race looked a tough race and the ground was nicer here. She has won her Group One and whether that was here or France, I wouldn’t be fussy. It has worked out well in the end,” he said.

It was a first career Group One for teenage jockey Shane Crosse who last month missed out on the St Leger winning ride on Galileo Chrome after testing positive for coronavirus.

“It’s been a head wrecking few weeks for me and for everyone. It wasn’t easy to sit at home and watch the Leger from the couch,” said Crosse.

“It was tough but I’m delighted the horse won, and for Tom [Marquand]. He’s a lovely guy. There’s no point in huddling up and crying about it,” added the Co Tipperary rider.