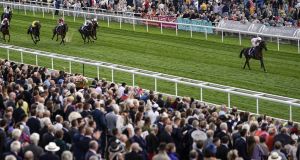 Should Battaash bring his ‘A-Game’ to Friday’s Nunthorpe Stakes it could be a case of blink and you’ll miss the fastest horse in the world.

A total of 16 hopefuls line up for the Ebor festival’s Day Three feature but this looks a Group One that revolves around a single figure. So much so that common consent has it the one danger to Battaash is probably Battaash.

Ordinarily the prospect of five flat furlongs on fast ground up the Knavesmire might be regarded as a perfect scenario for this pocket-sized speedball.

There have been times during his career when the Charlie Hills-trained gelding has looked all but unbeatable over the minimum five furlong trip, most recently in a spectacular Goodwood performance.

A repeat of that might have the famous 1990 Nunthorpe time of 56.16 seconds set by Dayjur in the same Sheikh Hamdan colours under threat.

Lurking in the background though is the memory of last year’s race when Battaash ruined his chance before it even began, boiling over and finishing only fourth to Marsha.

That next time he gave Marsha a four-length hammering in the Prix de l’Abbaye shows the task his opposition – which includes four Aidan O’Brien runners – face if the favourite behaves himself.

It’s an ‘if’ that will sustain the others however as Mabs Cross’s trainer Michael Dods has pointed out.

“If it’s the same Battaash that turned up at Goodwood I think there’s only one winner,” he said. “He’s the best around over five furlongs. But he did boil last year and you can’t be sure which Battaash will turn up.”

Hills believes greater maturity is allowing this exceptional sprinter to consistently show his best and, in theory at least, York’s minimum trip should be perfectly suited to his star.

Ryan Moore has picked Sioux Nation from the Ballydoyle quartet and he sports first-time blinkers in an attempt to bridge a nine-length gap to the favourite from Goodwood.

Havanna Grey also has ground to make up from that King George V Stakes but if Battaash doesn’t fire the grey could be a value bet to pick up the pieces.

The other end of the distance spectrum will be the focus in the Wetherbys Lonsdale Cup where a £1 million sterling bonus will go the way of Stradivarius if he wins.

After victories in the Yorkshire Cup, Ascot Gold Cup and Goodwood Cup John Gosden’s bonny stayer is in line to pick up the lucrative incentive bonus in its first year of operation.

Idaho represents Ballydoyle while Willie Mullins gives the 2015 winner Max Dynamite another crack at the race. But, even with his Group One penalty, Stradivarius looks set for a big pay-day.

The Irish Rover was third to Advertise in the Phoenix Stakes earlier this month and will be fancied to give Aidan O’Brien a third Gimcrack Stakes and a first since Rock Of Gibraltar in 2001.