O’Briens set for York duel in pursuit of Juddmont glory 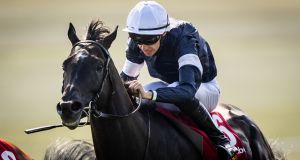 Aidan and Joseph O’Brien twice memorably combined to win York’s Juddmonte International although they will be rivals on Wednesday – each trying to saddle a 10th Irish-trained winner of the famous race.

Father and son scored back-to-back victories as a trainer-jockey team with Declaration Of War and Australia in 2013-14.

Australia was the last Irish winner of the prestigious event which famously began in 1972 when Vincent O’Brien’s Roberto created a major shock by beating Brigadier Gerard.

Other legendary names of the sport such as Sea The Stars (2009) and Frankel (2012) also feature on the roll of honour of this opening day highlight to York’s Ebor festival.

In all likelihood the odds are against any of these eight runners reaching such all-time-great status.

But O’Brien snr’s pursuit of a sixth victory in the race, and his son’s first attempt to win it as a trainer with Irish Derby hero Latrobe, adds to an intriguingly competitive prospect.

Latrobe and Ballydoyle’s 2,000 Guineas winner Saxon Warrior are among a quartet of three-year-olds taking on an older generation led by Poet’s Word.

Wayne Lordan takes over from the suspended Donnacha O’Brien on Latrobe who the Cork man rode on his very first career start. However, both Irish hopes are rated behind Roaring Lion among the classic generation.

Roaring Lion levelled his own career rivalry with Saxon Warrior to 2-2 when emerging best in Sandown’s Eclipse last month.

That John Gosden’s runner was also superb over this course and distance in the Dante back in May only adds to a belief he is the best chance of a three-year-old reversing any trend towards older horse superiority so far in 2018.

The youngsters get a generous 7lbs from their seniors, although even that might not be enough against Poet’s Word in particular.

Poet’s Word might not wind up ranked among the absolute elite in racing history. In fact it’s arguable if he has yet grabbed the public imagination. But at five he has transformed into an absolute top international performer.

Only such talents can secure the official 130 rating Poet’s Word got for overcoming a less than perfect route through last month’s King George where he emerged over his stable companion Crystal Ocean.

If those kind of figures were being bandied around about more of a talking horse then it’s easy to imagine odds-on about the favourite.

As it is, Poet’s Word looks to have impeccable credentials for extending Michael Stoute’s peerless Juddmonte International record to seven wins.

Patience has always been the key to the 72-year-old trainer’s outlook. And his latest star performer embodies it. Poet’s Word began last season in an all-weather handicap. Now he looks a formidable rival for any middle-distance opponent.