Even without Forever Together, Aidan O’Brien has three in the Group One feature 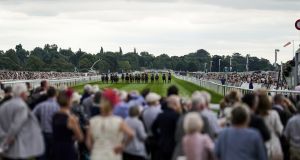 Forever Together is absent from Thursday’s clash of the Oaks winners at York although even without his Epsom heroine, Aidan O’Brien is still triple-handed in the Group One feature.

Dermot Weld also pitches Eziyra into the fray so half of the eight-strong field will be Irish-trained, although that probably won’t stop this being billed in terms of Laurens versus Sea of Class.

The winners of the French Oaks and the Irish Oaks are set for to dominate the betting despite both the Irish challenge and the fact they are both taking on older fillies for the first time.

Eziyra is joined in the senior squad by Horseplay and in particular by Coronet, who finished runner-up to the outstanding Enable in last year’s race.

If 2017 represented something of a lap of honour for Enable, then this year’s Yorkshire Oaks is likely to be anything but.

The decision to skip Epsom and wait for the Curragh Oaks paid off perfectly for Sea of Class when she got the better of Forever Together in a memorable finish under a superb ride.

James Doyle was coolness itself on a filly who has yet to establish if her significant natural talent is matched by similar resolve.

Her rider’s performance at the Curragh was supremely skilled, but there have been enough glimpses of temperament in Sea of Class to suggest that a tender touch might have been more necessary than simple aesthetics.

If the daughter of Sea the Stars can win without coming under significant pressure here, then she really will prove herself a division leader.

Love of a scrap

Because one thing Laurens has shown in three Group One wins to date is a love of a scrap. And if the bare form of her wins in the Prix Alary and the Prix Diane in France leaves her officially rated behind Sea of Class, both suggested she could thrive for this step up to a mile and a half.

Against that, Magic Wand has plenty to prove. The Ribblesdale winner started odds-on for the Irish Oaks but struggled in fifth and was found afterwards to be carrying the bug that has so disrupted Ballydoyle in recent weeks.

A repeat of her Royal Ascot form would make her dangerous to all and the market could prove a significant pointer to her readiness.

Coronet’s proven liking for York looks to make her best of the older runners but a first try at a mile and a half could make Laurens best of all.

The Albany Stakes third Fairyland is O’Brien’s representative in the opening Lowther Stakes at York.

The Day Two feature of Killarney’s August festival is the E50,000 KWD Kingdom Gold Cup. Willie Mullins runs four but towards the bottom lurks Top Othe Ra, trained by his brother Tom, who also has Ben Coen’s valuable 7lb claim on his side.