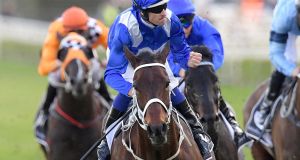 The seven-year-old mare trained by Chris Waller eased into her work in the A$500,000 (€320,000) Winx Stakes before thundering down the straight to win the 1,400m weight-for-age race by a length over Invictus Prince.

Hailed as the world’s top sprinter, Winx moved past Black Caviar’s record streak of 25 wins while extending her national record to 19 Group 1 victories.

Four months after winning the Group 1 Queen Elizabeth Stakes at the same racecourse, the bay mare’s triumphant return to the track left Waller choking back tears.

“(I’m) just looking for signs of her losing her dominance,” Waller said on Saturday, the same day Black Caviar turned 12.

“I haven’t seen one, one ounce of it. If anything I’ve seen improvement.

“It’s quite scary. It shouldn’t be about me. It’s about that amazing animal behind us.

“What she’s doing for sport and Australian racing, we should all take a bow and say: ‘well done, Winx.’

“What she does to horses is simply break their heart.”

Unlike the Peter Moody-trained Black Caviar, who won the Diamond Jubilee Stakes at Royal Ascot in 2012, Winx has never been tested overseas and hopes that she might run in the Queen Anne Stakes in England in June came to nothing.

Her connections have now set Winx the task of claiming a record fourth consecutive win in the Cox Plate, one of the country’s most prestigious races held in the Australian spring.

For a fleeting moment, Winx’s record-setting attempt appeared in doubt at Randwick, with Godolphin’s Kementari forcing her wide as she rounded into the straight.

But after dealing with Kementari, the Hugh Bowman-ridden mare swept home to the roars of a packed crowd along the rail.

“When she balanced up and saw the winning post ... what can I say? She’s just incredible,” said Bowman.

Athletics Ireland confirm seven sessions for National Championships 17:23
Trump prefers Jordan to James because ‘he wasn’t political’ 16:45
Mark Selby books semi-final spot after crisis of confidence 13:09
Galgorm Castle resort could rescue 2020 Irish Open 11:25
Iain Henderson out for up to 10 weeks after hip surgery 10:26
Here is your handy guide to sport on television this week