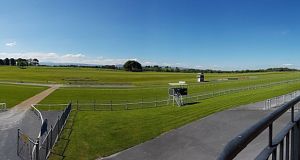 Ballinrobe fixture was abandoned after three races when safety concerns about the ground were expressed to the stewards.

On the back of last week’s controversial abandonment at Ballinrobe the feasibility of on-the-spot rearrangement of races rather than simply cancelling meetings is being examined.

The Ballinrobe fixture was abandoned after three races when safety concerns about the ground were expressed to the stewards by a deputation of senior riders.

Fears for the future of flat racing at the Co Mayo track were dismissed after a meeting of all parties at Irish Horseracing Regulatory Board (IHRB) HQ at Monday.

Afterwards the regulatory body said it is trying to find alternatives to cancelling fixtures in future.

On Tuesday the IHRB’s chief executive Denis Egan said: “The next race at Ballinrobe that evening was a mile and one handicap and there was a suggestion that if that race had been abandoned there would have been a chance of running the following mile and five race.

“Now in the circumstances I don’t think it was realistic because there was a problem with the ground even though no one could find the problem.

“There is a view though that in future, rather than abandoning a meeting, there would be other alternatives stewards could consider, such as re-jigging the programme.

Egan stressed, however, that a reshuffle of last week’s Ballinrobe card wouldn’t have prevented the meeting from being abandoned.

“There’s nothing to suggest a re-jig would have worked because the difficulty was no one could point out where the problem was.

“If someone said for arguments sake the problem was on the last bend and you could possibly move the rail that would solve the problem. But no one could pinpoint the problem,” he said.

Meanwhile, the profile of flat racing at Killarney’s August Festival has been boosted in recent years, most notably by the subsequent Epsom Derby hero Wings Of Eagles, who won his maiden at the track in 2016.

A year later this season’s Grand Prix de Paris winner Kew Gardens did the same thing at the festival which starts again on Wednesday afternoon.

The maiden won by Kew Gardens is the opener and with Donnacha O’Brien suspended, the Ballydoyle pick could be Seamus Heffernan’s mount Whitsunday Islands.

Heffernan is on I Can Fly in the featured Racing Post Vincent O’Brien Ruby Stakes where Petticoat is the sole runner with a triple-digit rating.

Her 102 mark trumps Rionach’s 93. But the latter is a course and distance winner who did very well to get as close as third in the big Galway handicap after blowing the start and racing wide.

“She came out of the race very well and we hope she’ll go and put that behind her,” said Rionach’s trainer Michael O’Callaghan. “She’s got form over course and distance and we think she’s capable of winning a Listed race.”

Riven Light’s stunning return to action in that big mile handicap from serious injury was one of the highlights of the Ballybrit festival and Willie Mullins’s star could line up next in Sunday’s Group Three Royal Whip at the Curragh.

Riven Light completed back-to-back wins in the Galway race despite top weight, the widest draw and not having run since sustaining a serious leg injury in Australia last October.

His performance has seen his rating boosted to a career-high 114 and Riven Light is one of a dozen left in Sunday’s ten furlong event.