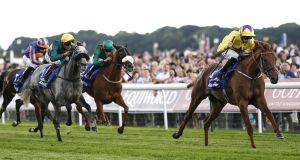 Sea Of Class is as low as 4-1 favourite to complete a superb family hat-trick in the Prix de l’Arc de Triomphe after her devastating Yorkshire Oaks success on Thursday.

Like her sire, the 2009 Arc hero Sea The Stars, the filly is owned by the Hong Kong based Tsui family.

And the Tsui’s Arc story stretches back all of quarter of a century to when Sea The Stars’ dam, Urban Sea, was a shock winner of France’s greatest race in 1993.

So Longchamp on the first Sunday in October now looks the obvious target for this latest star performer who justified 7-4 favouritism in style at York.

Off a moderate early pace, Sea Of Class sailed through from the rear of the field to win by over two lengths from Coronet with Dermot Weld’s Eziyra running a fine race in third.

Both of those older horses couldn’t get to grips with 2017’s outstanding middle-distance filly Enable and were once forced again to play bit-parts behind an exceptional looking talent.

Enable went on to prove herself in the Arc. Sea Of Class isn’t even entered for the Arc. However a supplementary entry is surely on the cards.

Equally, and on his 58th birthday, trainer William Haggas will surely never get a better present than this latest Group One success.

Once again the chestnut filly showed push-button acceleration without recourse to the whip and this time won with real authority.

“That was fantastic, absolutely sensational,” Haggas said. “She’s surprised me today. It’s a front-runners’ track and she was devastating.

“She’s not in the Arc yet and I stress it is a ‘yet’. There is a lot of water to pass under the bridge but I imagine Mrs [Ling] Tsui will be keen to pay the supplementary fee.”

“It went perfect. There were questions about what she left in the locker but she showed it today. She’s a serious racehorse,” he said. “I’ve enjoyed some nice winners but I really enjoyed that one!”

Considering Sea Of Class entered training only last December her progress to the top of middle-distance tree is little less than remarkable.

It’s a timeframe to pale next to the 31 years it has taken Mark Johnston became the most numerically successful trainer in British racing history.

The Yorkshire-based Scot saddled winner No. 4,194 through the 20-1 handicap winner Poets Society, who scored a narrow win under Frankie Dettori.

“I started small. It was just one winner at a time and with horses like this. That was his sixth win of the year. That’s what it’s about – to run them. This horse epitomises what we’re about. I think he’s won about nine races now,” said the former vet.

Johnston invariably maintains winners are what it is all about and even for the overwhelmingly successful Aidan O’Brien there seemed to be relief at Fairyland’s narrow Lowther Stakes victory earlier on the card.

A bout of sickness has interrupted normal Ballydoyle service this summer but O’Brien indicated the worst may now be over.

“It was in all of our three-year-olds. It was as bad as we’ve ever had at Ballydoyle,” he said after the 6-4 favourite justified late support by just a nose. “I think we’re at the other side of it now though. The year is not over yet. But if there is a relapse the season is over.”