Roaring Lion is pride of Juddmonte with impressive victory 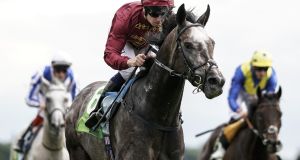 Roaring Lion won the clash of the generations in Wednesday’s Juddmonte International at York and stamped 2018 as the ultimate grey season for Europe’s best three-year-olds.

Jessica Harrington’s flying grey filly Alpha Centauri has been regarded as the exception to a growing consensus about this year’s classic crop being less than outstanding.

But in the most definitive middle-distance clash between three-year-olds and older horses so far this season, it was the grey colt Roaring Lion who landed a hugely impressive victory.

However, if Roaring Lion provided 22-year-old Murphy with perhaps the most satisfying moment of his career to date, the race proved a nightmare for Poet’s Word’s rider James Doyle.

Rarely have the tactical nuances of top-flight flat action played out so dramatically; after looking to be in Position A at the top of the straight, the favourite suddenly found himself in a figurative Row Z.

On the turn-in, Christophe Soumillon on Godolphin’s outsider Thunder Snow caught most everyone by surprise when leading the field to the stands rail.

The move suddenly left Godolphin’s No 1 Benbatl on the outside of Poet’s Word and in a split second Doyle was trapped on the rail and riding desperately to secure room.

In contrast Murphy got a perfect tow and tailed Benbatl to the distance before sending Roaring Lion clear. Poet’s Word was admirably game in pursuit when finally clear but was always fighting a losing battle.

“You all saw it. It’s not ideal,” Doyle said afterwards while Poet’s Word’s trainer Sir Michael Stoute consoled himself with his horse’s performance.

“James said it was very messy. We thought we were in a good position turning in and then we were in the worst position. He was very brave to get balanced and run back and get second. I could only be pleased with him. The winner had gone when we were getting reorganised,” he said.

It was a first Juddmonte International for Roaring Lion’s trainer John Gosden, while the Qatar Racing boss Sheikh Fahad said the victory trumped even Dunaden’s 2011 Melbourne Cup for satisfaction.

No doubt the organisers of the Longines Irish Champions Weekend were also very satisfied to hear the owner nominate the QIPCO Irish Champion Stakes as possibly Roaring Lion’s next start. He was immediately installed a 6-4 favourite for Leopardstown.

But if Doyle was frustrated, there was nothing but joy for Murphy whose Group One fortunes have jumped to another level this year.

“It worked out to plan and I’m on a very special horse. I’ve ridden Benbatl and I knew if I followed him I was following the right horse,” he said. “It’s what I’ve dreamed about my whole life – it’s not often it comes true.”

Three years after watching his outstanding Derby and Arc winner Golden Horn get beaten at 4-9 in the race, Gosden has secured a maiden International victory.

“I was expecting a big performance from him. This horse ran a great race in the Derby. He won his Eclipse well and he’s got better through the season,” the Englishman said.

Earlier in the day Doyle had enjoyed better fortune when picking up the Great Voltigeur on the Godolphin second-string Old Persian, who just edged out his stable companion Cross Counter.

The winner was cut to 8-1 for next month’s St Leger, but some bookmakers also cut Kew Gardens’ Leger odds despite the Irish colt finishing only third.