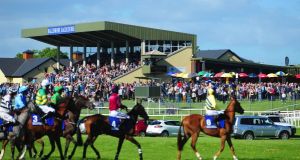 Flat racing at Ballinrobe will continue next year.

Flat racing at Ballinrobe has got an official green light to continue and the events that forced last week’s card at the Co Mayo track to be abandoned have been described as an “isolated incident” by the Irish Jockeys Association.

An almost two and a half hour meeting attended by bodies representing jockeys, trainers, owners, stable-staff, racecourses and others was held at the Irish Horseracing Regulatory Board on Monday to examine the fallout from last week’s controversial cancellation.

Racing was abandoned after three races when a deputation of riders, including Kevin Manning, Declan McDonogh and Colm O’Donoghue, reported to the stewards that issues with the racing surface meant it was not safe to continue racing. The stewards then abandoned the meeting.

That prompted clerk of the course Lorcan Wyer to question the future of flat racing at Ballinrobe which provoked the meeting at IHRB headquarters on the Curragh that attracted 24 attendees overall.

Afterwards a statement confirmed flat racing will continue at Ballinrobe next year and that procedures which stewards apply for calling off meetings will be reviewed. It also stated there was unanimous agreement that the safety of jockeys and horses is paramount and takes precedence over all other considerations.

The statement said there was no evidence the surface of the track was giving way underfoot or that it had shifted. But it was accepted the riders had concerns that some horses were slipping.

There was also unanimity that the “perceived issue with the racing surface was a once-off and unlikely to reoccur”.

Immediately after last week’s cancellation there was some criticism of the jockeys who reported their concerns which many felt effectively left the Ballinrobe stewards with little choice but to call off the fixture.

However the Jockeys Association Secretary, Andrew Coonan, said after Monday’s meeting: “It’s quite clear from the video you can see a horse slipping. It was accepted that happened and occurred. Whether people regard riders as having overreacted or not is a matter for each individual. But I regard this as an isolated incident at a track that is otherwise very well presented.”

Coonan also insisted the final call on abandoning a meeting is always with the stewards and that jockeys are breaking the rules if they don’t report anything that might affect the running of the horses they ride.

“This is not a question of any rider saying ‘we’re not riding’. The riders were prepared to continue riding. They told it as it was from their perception and the stewards came to their decision,” Coonan said.

“Not one single rider has said to me there should be no flat racing in Ballinrobe. It’s a tight, sharp track. We know what it is. It serves a very valuable purpose for lots of trainers and jockeys.

“There was an incident in 2010 in which an odds-on favourite slipped up on the top bend and turned over. As a result two remaining flat races didn’t take place but the jump races did.

“So we’ve had eight years of trouble-free racing since and there’s no earthly reason why flat racing shouldn’t continue at Ballinrobe,” he added.

Flat racing at the Mayo course has finished for 2018 but it hosts a National Hunt fixture next week.

Aidan and Joseph O’Brien will fly the Irish flag in Wednesday’s Juddmonte International at York when they respectively saddle the 2,000 Guineas winner Saxon Warrior and the Irish Derby hero Latrobe.

The Michael Stoute-trained Poet’s Word is favourite for the Group One highlight on the first day of the famous Ebor festival. Roaring Lion and Without Parole will represent John Gosden in final eight-runner field.

Saturday sees the historic Ebor handicap run and Willie Mullins’s Stratum is the ante-post favourite. He is joined in the list of possible Irish starters by Ger Lyons’s Mustajeer and Sea The Lion who is trained by Jarlath Fahey.

Mullins has four declarations for Sligo’s jumps fixture on Tuesday evening including the French bumper winner Eglantine Du Seuil who makes her Irish debut in the opener.

The quartet also includes Pleasure Dome who is topweight for the second of the handicap hurdles although faces a potent Gordon Elliott challenger in Swingbridge.

The veteran goes to Sligo on the back of an easy win over fences at Perth last month. On the basis of that effort Swingbridge could be attractively weighted back over flights.

Owner JP McManus enjoyed a day to remember with Limerick’s Croke Park success on Sunday and the sponsor of the new All-Ireland hurling champions can see his prolific Pass The Ball make it four wins in a row in another handicap.