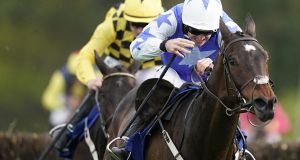 Kemboy has already generated more headlines than any other horse this season and he finally makes his return to action in Saturday’s Grade One feature at Leopardstown.

When news broke two months ago that Horse Racing Ireland had suspended the Supreme Racing Club over allegations of financial impropriety it was the Kemboy quandary that immediately struck home.

Amid all the subsequent speculation about overselling of shares in Supreme and various administrative irregularities, it was the fate of Kemboy’s career that figured front and centre.

HRI eventually barred Supreme from owning horses last month which allowed new registrations be made for each of the estimated 29 horses that almost 500 individual shareholders had been involved in.

The result is that the Willie Mullins-trained star returns to action on day three of the Christmas festival under an ownership banner of the Kemboy-Brett Graham-Ken Sharp syndicate.

Graham, a New York-based businessman who was one of the original shareholders in Kemboy, has admitted to being left “scarred” by the whole experience.

Even by racing’s colourful standards it is a rare context for a potential Gold Cup winner to make his seasonal debut.

There is some familiarity though as the €175,000 Savills Chase is where Kemboy originally burst into blue riband calculations a year ago.

Under an inspired David Mullins ride he grabbed the initiative with a circuit to go and wound up an eight-length winner.

On unseasonably quick ground there were some prepared to believe the outcome was a form blip, an impression hardly diluted when Kemboy unseated Mullins at the very first fence in the Gold Cup.

However a subsequent rout of no less than Clan Des Obeaux at Aintree, and a perfect retirement cue for Ruby Walsh at Punchestown, left the handicapper rating him the best around in Ireland.

Considering he had his Gold Cup-winning stable companion Al Boum Photo two lengths behind him at Punchestown that calculation was hard to argue with.

Considering Leopardstown’s chase track is drying out, it’s little surprise Al Boum Photo skips Saturday’s race, but most every other significant Irish contender for the Gold Cup is present and correct.

They include the admirable Anibale Fly, placed in the last two Gold Cups, as well as Road To Respect, who joins Delta Work and Balko Des Flos in a three-pronged Gigginstown attack.

However, if Kemboy’s appearance is centre stage then jostling for attention will be Presenting Percy.

The horse that started favourite for last season’s Gold Cup, and whose career looked in jeopardy at one point shortly afterwards, is one of the most popular runners in the country.

Galway trainer Pat Kelly has brought the former dual-Cheltenham festival winner back from that Gold Cup reverse and Presenting Percy returned with a bang in the John Durkan Chase earlier this month.

Expecting a thorough stayer to win a two-and-a half-mile Grade One off a slow pace, and on his first start for nine months, was asking a lot. Davy Russell’s illness meant he was ridden for the first time by JJ Slevin as well.

But considering how he was left flat-footed when Min & co quickened there was lots to like about the enthusiasm with which he stayed on to be third.

The benefit of that spin under his belt might prove important when it comes to the business end of Saturday’s Grade One highlight.