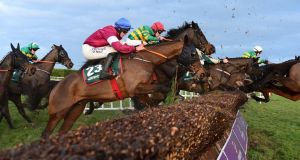 Roaring Bull and Jack Kennedy (blue cap) on the way to winning the Paddy Power Chase during day two of the Christmas festival at Leopardstown. Photograph: PA Wire

A ninth success in the most valuable race of the Christmas festival looked all but in the bag for McManus when the gambled-on 6-1 favourite Fitzhenry hit the front in the closing stages.

But to the horror of favourite backers among the official 16,727 crowd, Roaring Bull, in the colours of O’Leary’s Gigginstown Stud, produced a last-gasp lunge in the final strides to win by half a length at 16-1.

It completed a big-race double for O’Leary, trainer Gordon Elliott and jockey Jack Kennedy, who had combined earlier to win the Future Champions Novice Hurdle with Abacadabras.

That horse won at odds-on but it looked any price about Roaring Bull after the final fence only for Kennedy to pull an upset out of the fire.

Even Elliott found himself cheering for Fitzhenry’s trainer Paul Nolan in the closing stages.

“I feel sorry for Paul Nolan. He’s a very good friend of mine and I thought he’d won. I was cheering him on until I saw my lad at the last minute,” he admitted afterwards.

It was an unlikely success for 20-year-old Kennedy who had to reach for Plan B after an original false start.

“I wasn’t in the position I wanted to be but he travelled lovely. He didn’t find as much as I thought he would after the second last but to be fair to the horse he dug deep in the end,” he said.

The stewards held an enquiry into Roaring Bull’s apparent improvement in form and Elliott explained that blinkers had ‘lit him up’ on his last run but he settled better this time.

Roaring Bull was given 50-1 quotes by some firms for the Aintree Grand National in April.

Abacadabras was promoted to 7-2 favourite for the Supreme Novices Hurdle after his somewhat facile defeat of the outsider Heaven Help Us.

Market rival Blue Sari was beaten from the second last and faded to last of the four runners. A veterinary examination subsequently found him to be blowing hard.

“He’s got a bit of pace and we rode him for it,” Elliott said. “He’ll probably come back here in February. I’d say a bit better ground would suit him as he doesn’t bend his knee too much and just flicks across the top of the ground.”

The result was a boost for Elliott’s unbeaten novice Envoi Allen who beat Abacadabras in the Royal Bond at Fairyhouse earlier in the month.

Elliott was also on the mark with Fury Road’s success in the Grade Two feature at Limerick, where the Gigginstown team secured three more winners on the card.

The evens favourite did have to survive a final flight mishap though before beating Well Set Up.

“The ground is so testing. He would have met the last perfectly if we were racing. But on that heavy ground I got no response from him and could do nothing,” Russell reported.

At Chepstow McManus’s recent purchase Cerberus had to settle for second too in the Grade One Finale Hurdle behind an impressive front-running winner, Allmankind.

The Welsh Grand National produced a locally trained winner for the first time in over half a century as Potters Corner landed the gruelling marathon at odds of 8-1.

Christian Williams trains near Bridgend and entrusted the ride on Potters Corner to 17-year-old jockey Jack Tudor. It was Tudor’s 15th ever winner. The sole Irish hope Sea Cadet was pulled up.

“Jack gave him the ride I thought he would. I knew what Jack was capable of 12 months ago so it’s no surprise to me the ride he gave,” Williams said.

Racing at Leopardstown and Limerick continues over the weekend. Saturday’s feature at the Dublin track is the €170,000 Savills Chase in which last year’s winner Kemboy returns to action.