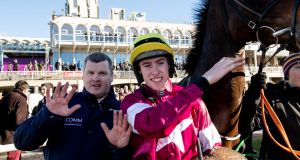 The stellar racing career of Michael O’Leary’s star mare Apple’s Jade appears on the line at Leopardstown on Saturday.

The 10-time Grade One winner hasn’t won in 10 months and O’Leary’s Gigginstown Stud team has indicated that if something like the old Apple’s Jade doesn’t show up this weekend, then retirement beckons.

She has been declared for both Saturday’s Frank Ward Memorial Hurdle over three miles and the following day’s Matheson Hurdle over the minimum trip.

The latter is almost certainly precautionary in case she exits early from her first Grade One option, but either way Apple’s Jade will don first-time cheek-pieces.

The scale of her talent is that at her peak she would be a clear choice for either race at both ends of the distance spectrum.

The Gordon Elliott-trained star has landed Saturday’s race for the last two years. Last February’s Irish Champion Hurdle triumph at two miles was enough to allow her to start favourite for the Champion at Cheltenham a month later.

That ended in failure as did two other subsequent runs last season. But crucially in two starts this season she has failed to return to her best.

Bacardys upset 1-4 odds in last month’s Lismullen Hurdle while an attempt at four in a row in the Hatton’s Grace resulted in an uninspired third to Honeysuckle.

Maybe the new headgear will rejuvenate Apple’s Jade but Eddie O’Leary has already suggested the Gigginstown team won’t hang around if it doesn’t.

Bacardys’s presence will be a good gauge as to her level midway through the season and he may prove a bigger threat than either his stable companion Penhill or the veteran English raider Unowhatimeanharry.

Saturday’s Leopardstown card also sees Allaho’s long-awaited debut over fences in a Beginners Chase, although the principal novice focus this weekend will be on Sunday’s Grade One.

Allaho’s old rival Minella Indo will have just his second start over bigger obstacles in the Neville Hotels Novice Chase.

Runner-up to Laurina on his Gowran debut, Minella Indo will try to pull off the rare feat of breaking his maiden in a top-flight event.

A shock 50-1 success in last season’s Albert Bartlett Hurdle at Cheltenham indicates beating the odds is not a problem to Henry De Bromhead’s runner. Just as importantly, his subsequent win at Punchestown proved that was no fluke.

Minella Indo is up against more experienced types such as the Gordon Elliott pair Battleoverdoyen and Champagne Classic while Willie Mullins relies on Carefully Selected.

The fact that coming here without a Beginners win under his belt has always been on De Bromhead’s mind looks significant in relation to a horse that should thrive at three miles.

Sunday’s other top-flight contest will probably be without Apple’s Jade, which for many will principally make it a test of Klassical Dream’s Champion Hurdle credentials.

The Mullins runner could finish only third on his seasonal debut in the Morgiana and, although he ran keen there, it leaves Klassical Dream with plenty to prove.

He is accompanied by two stable companions, Aramon and Sharjah, and the latter could be a value alternative if coming back to his best.

Sharjah was half a dozen lengths behind Klassical Dream in that Morgiana. A year previously he’d won that race before landing this Christmas prize, and a return to Leopardstown’s inner two miles could be right up his street.

Willie Mullins has four of the nine in the Grade Three Mares Hurdle and it’s little surprise Stormy Ireland appears to be the stable number one pick. She was impressive on her return to action at Punchestown last month.