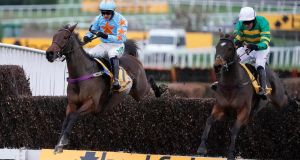 Defi Du Seuil saw off the veteran Un De Sceaux in a pulsating climax to the Betfair Tingle Creek Chase at Sandown.

Eight runners went to post for the Grade One feature, with the Philip Hobbs-trained Defi Du Seuil the marginal favourite at 2-1, ahead of the five years older Un De Sceaux and the grey Politologue — both previous winners of the race.

Ornua took the field along for much of the two-mile contest, before the 11-year-old Un De Sceaux took over racing down the back straight in the hands of Paul Townend.

Barry Geraghty covered the move aboard Defi Du Seuil and the pair rounded the final turn ready to do battle.

Just for a moment it looked like Un De Sceaux had his rival in serious trouble, but Defi Du Seuil managed to get on terms and then looked set to win decisively after touching down in front after the final fence.

However, Un De Sceaux — successful in the 2016 renewal — refused to go down without a fight and came roaring back up the hill, with just a neck splitting the pair at the line.

Only three-quarters of a length away in third was northern raider Waiting Patiently, with Ruth Jefferson’s stable star bouncing right back to his best to offer plenty of hope for the rest of the campaign.

Meanwhile at Aintree Native River claimed his first victory since his Cheltenham Gold Cup heroics of 2018 with a dominant front-running display in the Virgin Bet Price Boosts Many Clouds Chase.

Just four runners went to post for a Grade Two contest that promised a fascinating rematch between the Colin Tizzard-trained Native River and Nicky Henderson’s Might Bite, who fought out an epic finish to the blue riband at Prestbury Park in March, 2018.

Both horses were fitted with differing headgear, with Native River sporting blinkers for the first time and Might Bite with cheekpieces in a bid to rekindle the enthusiasm that was so lacking throughout last season.

The big two went toe to toe from flag-fall, but the contest was effectively over after just four fences, with Might Bite blundering and unseating Nico de Boinville — leaving 5-6 favourite Native River in splendid isolation, with Black Corton and Outlander never in contention.

From that point Native River jumped well in the main, pursued by the riderless Might Bite.

And despite Richard Johnson easing him down to a trot on the run-in, the chestnut gelding still came home with 33 lengths in hand.