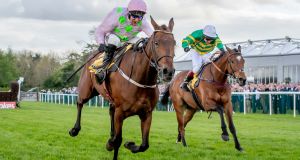 It’s been a long wait but eight months after Chacun Pour Soi had the racing world at his feet he returns to action on day two of Leopardstown’s Christmas festival.

It will be just a third start by Chacun Pour Soi for Willie Mullins since joining the champion trainer from France three years ago.

A series of niggly problems prevented the seven-year-old from running until last March when he hosed up in an ordinary Beginners Chase at Naas.

It was a very different scenario subsequently at the Punchestown festival in a Grade One crammed with proven Grade One novice talent.

Defi du Seuil and Duc Des Genievres had landed two of the major novice events at Cheltenham. Voix Du Reve arrived on the back of a top-flight win at Fairyhouse. All were made to look ordinary.

Chacun Pour Soi’s inexperience counted for nothing as he won in brilliant style and had his trainer purring.

“I think we’ve seen a real racehorse,” gushed Mullins who is normally circumspect when it comes praise.

Not since Douvan’s novice days had he seemed more enthused and the significance of that was quickly noted.

Since then Chacun Pour Soi has been hyped as the horse to finally fill in the most notable blank remaining on his trainer’s glittering CV, the Queen Mother Champion Chase.

Whether the first impressions at Punchestown were correct is unlikely to be decided in Friday’s Paddy’s Rewards Club Chase but it will definitely make the €125,000 a focus of attention.

Mullins also saddles Great Field and the ex-Supreme Racing Club star Cadmium but for many this will be all about the stable number one.

In his two starts to date in Ireland, Chacun Pour Soi has looked a superb jumper. However taking on hardened senior talents such as A Plus Tard and the English veteran Simply Ned will be a different test.

If the impression made at Punchestown is confirmed then the road to Cheltenham will seem to stretch wide open.

Friday’s other Grade One, the Future Champions Novice Hurdle, has attracted a disappointing five runners. They include three from Michael O’Leary’s Gigginstown operation although one of them, Easywork, won at Limerick on Thursday.

Abacadabras lost little in defeat when chasing home his stable companion Envoi Allen in the Royal Bond earlier this month and looks the one to beat. He has certainly already accomplished more over flights than Blue Sari who narrowly won on his sole hurdles start to date at Punchestown.

JP McManus’s four-year-old did, however, finish in front of Abacadabras in last season’s Cheltenham bumper and can be expected to step up on his first start of this term.

City Island, the impressive Ballymore winner at Cheltenham in March, is another making an eagerly awaited return to action when lining up for a Beginners Chase.

The form of his Cheltenham defeat of Champ looks strong and his subsequent Punchestown performance is probably best ignored. He hardly gets an easy assignment to start with over fences as the former dual-Champion Hurdle runner up Melon also lines up. Crucially Melon has already got a spin under his best this season and the task of keeping tabs on Fakir d’Ouodairies at Navan will have taught him plenty.

JP McManus has three in the handicap hurdle although Mark Walsh’s presence on The Moyglass Flyer only underlines interest in the lightly raced six-year-old.

The classically bred son of Galileo and Luas Line has run just twice, winning his maiden last year and running third at Navan last month. He has a first-time tongue-tie on this time and a mark of 121 might wind up looking generous.

Ragnar Lodbrok ran a fine debut when third to Eric Bloodaxe in a hot Fairyhouse bumper earlier this month and should be hard to beat in the finale.

1 Jack Nicklaus’ Trump endorsement leads to avalanche of dismay
2 World Handicap System: What is it? How does it work? Will my handicap change?
3 Return of Conor Murray’s box kicking could exploit French vulnerability
4 Centurion Cian Healy still marching to the beat of his own drum
5 All-Ireland football championship 2020: Our writers’ and pundits’ predictions
Real news has value SUBSCRIBE