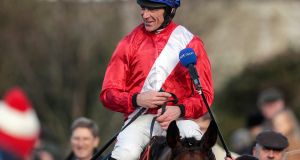 Davy Russell is at Limerick for day two of the Christmas action with Fury Road among four rides for the former champion jockey.

Fury Road has to concede weight all round in the featured grade two Lyons Jaguar Novice Hurdle and one certainty is he will have to work a lot harder for this pattern race than his last one.

The Gigginstown-owned novice had a lucrative canter round at odds of 1-25 when last month’s Monksfield Hurdle at Navan cut up to just three runners.

It means Fury Road has a grade three penalty for a contest with an illustrious roll of honour in recent years.

Willie Mullins has four of the 10 contenders this time and Vis Ta Loi impressed when winning at Cork last time. Fury Road however looks ready to set a lofty standard.

Mullins’s grade one bumper winner Colreevy should fill a similar role in a later maiden hurdle, especially since she steps up half a mile from her previous effort over flights at Cork.

The champion trainer gives Ciel de Neige a third start in the opening maiden and an official mark of 135 makes the McManus runner difficult to oppose.

Ciel de Neige was doing all his best work in the closing stages of a valuable handicap behind stable companion Janidil at Fairyhouse last time.

Bob Lingo’s brother won a point to point in 2017 after which he was bought for £250,000. The fact he hasn’t been seen since suggests things have been far from smooth with him.

In the circumstances, Baptism of Fire, a point winner in April, and a son of Jeremy, could be the answer, on very soft conditions.