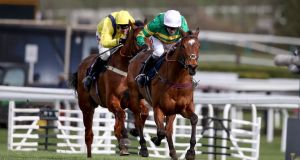 A select field of six will go to post for the Ladbrokes King George VI Chase at Kempton on St Stephen’s Day.

The two market leaders for the past month, Cyrname and Lostintranslation, head the field as both chase a second Grade One win in open company.

Cyrname has won each of his last three races – all at Ascot – and famously ended Altior’s 19-race unbeaten streak last time out in the 1965 Chase.

Paul Nicholls’ new star is currently the highest-rated chaser in training, on a 4lb higher mark than Colin Tizzard’s Lostintranslation, who bagged a first top-level win in open company last time out in the Betfair Chase at Haydock.

Both trainers also have exceptionally strong second-strings to their bow. Nicholls fields last year’s race winner Clan Des Obeaux, but he will be partnered by Sam Twiston-Davies this time as regular pilot Harry Cobden has opted to ride Cyrname instead.

Tizzard’s classy second string is Thistlecrack, another former winner of the race. He claimed the contest as a novice in 2016, but has suffered injury issues in the interim, although he did finish second in 2018.

Nicholls, who has won the race 10 times already – including five victories with the incredible Kauto Star – has been happy with the preparation of his pair.

“Both horses look in good shape entering the race. They schooled last Thursday with Sam on Clan and Harry on Cyrname,” he said.

“They both schooled super and both have had good preps. I’m nervously excited, but I’m looking forward to it as it is a race that I love.”

Both Tizzard horses arrive in good heart, with Lostintranslation seemingly having no excuses after a perfect first half to the season Assistant trainer Joe Tizzard said: “Lostintranslation has been absolutely fine and we have not missed a day with him at all.

“He has done all the work we wanted to do and goes into the race as we would like him. He showed last year he has the speed for two and a half miles and he jumps and travels well, so there are no worries about the track at all. It is only a small field, but a very competitive one and we are looking forward to the race.”

As for Thistlecrack, he chased home Paisley Park over hurdles on his only outing to date this season.

“He was second in this last year which was the best performance on ratings by any of our horses last season,” Tizzard went on.

“He had a lovely school under Tom Scudamore the other day and jumped very nicely. The owners were keen to have another go, as it has been a brilliant race for him. This is probably his last season in training and it would be nice to see him run well in the race again.”

Venetia Williams’ Aso, second in the Ryanair at Cheltenham in March, also lines up along with Willie Mullins’ Footpad, with the 2018 Arkle winner the lowest-rated runner in the race on a lofty 165. The only horse not declared was Warren Greatrex’s mare La Bague Au Roi.