Notebook proves jumping is the name of the game in Leopardstown 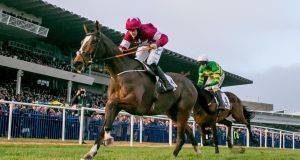 Notebook made assumptions of Leopardstown’s St Stephen’s Day feature being a match look very presumptuous indeed as he confirmed once more that jumping is the name of the game.

The Michael O’Leary owned star recorded a resounding success in the Grade One Racing Post Novice Chase that confounded predictions of any head-to-head between Laurina and Fakir d’Oudairies.

The latter was an honourable runner up behind the 7-1 winner but as they battled out the finish Laurina was being pulled up before the final fence.

The 11-10 favourite’s jumping appeared to disintegrate almost from the start and she was afterwards found to have burst a blood vessel.

It made no difference to the Notebook team of Henry De Bromhead and Rachael Blackmore who completed a St Stephen’s Day big race double initiated earlier by Aspire Tower in the Knight Frank Juvenile Hurdle.

That youngster looks a natural over flights and his stable companion looks even more spectacularly at home over the bigger obstacles.

“He loves to gallop and jump at speed. He just loves fences,” said De Bromhead who compared Notebook’s jumping to a pair of former Champion Chase winners he handled.

“These two-milers have to be half crazed to do what they do. Sizing Tiara was like that. Sizing Europe was too. They need that bit of madness,” he said.

Sizing Europe won an Arkle at the Cheltenham festival as well and Notebook was cut to a general 6-1 for that race in March.

Fauguernon’s earlier handicap hurdle made it a double on the Leopardstown card for O’Leary’s Gigginstown Stud team who also struck with two other winners in Limerick.

De Bromhead however is becoming a go to figure for Christmas crowds at Leopardstown.

The Co Waterford trainer saddled five winners at last year’s festival and Aspire Tower got him off the mark this time.

Blackmore grabbed the initiative from the start and the 15-8 favourite romped 18 lengths clear to land the Grade Two in style.

“He had a good profile from the flat and happily the lads (owners) decided to send him to us. The logical thing to do would be to come back here for the Grade one at the Dublin Racing Festival but we’ll see how he comes out of this,” De Bromhead said.

Aspire Tower was cut to 8-1 by some firms for the Triumph Hurdle at Cheltenham.

Gearoid O’Loughlin might have cut the most satisfied figure of all at Leopardstown on St Stephen’s Day after Cedarwood Road landed the opening maiden hurdle.

The Clare man trains a small string for the track committee member Chris Jones who saw his colours carried to an impressive 11 length victory under Davy Russell.

O’Loughlin will be in Chepstow on Friday to saddle Jones’s Space Cadet in the Welsh National at Chepstow.

“I’ve always liked him (Cedarwood Road) at home and he’s as good as I’ve ever had. The plan was to come here for either a bumper or a hurdle and go chasing next season. He jumps so well we decided to go for a hurdle here.

“He’ll probably only have one more run this season and could come back here for the Dublin Racing Festival.

“I’m from Clare originally and have five horses riding out so to have a winner at Leopardstown on St Stephen’s Day means a massive amount to me.

“I started off with the Costellos and was also with Enda Bolger and Jim Bolger. I only have my licence just over a year,” he explained.

“We’re flying out tonight (Welsh National) and I think Space Cadet has a good each way chance at around 40-1,” O’Loughlin added.

Champion jockey Paul Townend got off the mark for the week on Mt Leinster as the well backed 11-4 shot won a maiden hurdle by nine lengths.

“I was confident enough leaving the back that bar something silly happened I’d get through. He relaxed well today. He just got keen going into the back straight but is learning his job and his jumping is good,” Townend said.

Mt Leinster got 25-1 quotes for the Supreme Novices Hurdle at Cheltenham.

Joseph O’Brien continued his remarkable run of bumper form as Risk Factor and Tom Hamilton landed the finale at 4-1. Mullins’s Ramillies started a 5-4 favourite but faded to fourth after racing keenly.

O’Brien reported that plans for Risk Factor will work back from the Champion Bumper at Cheltenham although the Grade Two event at the Dublin Racing Festival is a likely stepping stone.

Noel Meade’s Fauguernon led home a Gigginstown one-two in a handicap hurdle and the trainer was also on the mark at Limerick with Miss Cognac.