Why don’t more athletes take a stand on Caster Semenya?

While courts decide how athletes with DSD should be treated, there’s silence on the track 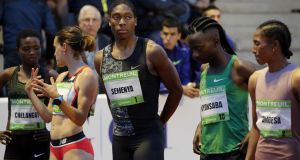 The Memorial Van Damme in Brussels. The Golden Gala Pietro Mennea in Rome. The Prefontaine Classic in Eugene, Oregon.

The only three Diamond League meetings on the global stage given honorary naming rights and only one is in memory of an athlete who never once set a world record or won an Olympic medal.

Ivo Van Damme is still considered one of Belgium’s finest. At the 1976 Olympics in Montreal, he finished second in both the 800m and 1,500m, only to be killed in a car accident later that year, four days after Christmas. He was 22 years old.

Steve Prefontaine came from Coos Bay, Oregon, and set a series of American records at the Hayward Field college track, before finishing fourth in the 5,000m at the 1972 Olympics in Munich, outsprinted for bronze by Britain’s Ian Stewart (who, by chance, I was named after).

Three years later Prefontaine’s life was also cut short when he crashed his gold MG, returning from a party in the hills outside Eugene, hours after he’d won a 5,000m race to raise funds for Hayward Field. He was 24 years old.

Still 44 years after his death Prefontaine is probably the most recognised name in American distance running: ask any high school or college runner from New York to San Francisco to name his idol of the sport and chances are they’ll say “Steve Prefontaine” or simply, “Pre”.

Pre stood out not only because of the way he ran, but also what he stood for – or indeed against. He was constantly at odds with the US Amateur Athletic Union and its efforts to dictate where they could run and what they couldn’t earn; he stood up for the rights of all his fellow athletes, young and old, men and woman, and he also stood up for the handmade runners his coach Bill Bowerman first created, decorated with a small swoosh and named after the Greek goddess of victory.

For the first time Sunday’s 2019 edition of the Prefontaine Classic is being staged at the Cobb Track and Angell Field at Stanford University, while Hayward Field is being rebuilt to host the 2021 World Athletics Championships. It’s no less an exciting meeting, and stands out already for the return of Caster Semenya in her first 800m race since the controversial reinstating and subsequent suspension of the IAAF regulations for athletes with differences of sex development (DSD), if only in Semenya’s case.

There’s been ample debate and discussion on this already, some intelligently informed, some naively misconceived, and by way of summary here is where things currently stand: on May 1st the IAAF won its case at the Court of Arbitration for Sport (CAS), which ruled that although the DSD regulations were discriminatory, “such discrimination is a necessary, reasonable and proportionate means of achieving the IAAF’s aim of preserving the integrity of female athletics in the restricted events”.

Still that was only the beginning of the end.

Semenya had time to run one last 800m at the Diamond League in Doha on May 3rd, before the regulations came back into effect, winning in a world-leading time of 1:54.98, and further extending the South African’s unbeaten record in the event to 30 races since 2015 (when the original IAAF regulation on athletes with hyperandrogenism was lifted by CAS, pending the original appeal by Indian sprinter Dutee Chand).

Things immediately changed. In the two women’s 800m races at the Diamond league meetings since – in Stockholm and Rabat – victory went to a non-DSD athlete for the first time since 2015, the American Ajee Wilson winning Stockholm in 2:00.87 and the Kenyan Nelly Jepkosgei winning Rabat in 1:59.90. (Semenya and the Burundi athlete Francine Niyonsaba had won the previous 22 Diamond League races).

In the meantime Semenya was prevented from competing in international women’s events from 400m to the mile unless she began taking oral contraceptives to reduce her testosterone-blood concentration to 5nmol/L, beginning from May 11th, if she wished to defend her World 800m titles in Doha in late September, having won in 2015 and 2017.

Semenya insisted that was never going to happen. She was originally down to run the 3,000m at the Prefontaine Classic before the Swiss Supreme Court intervened again. Following a further appeal by Semenya’s legal team, on June 3rd they made a “super-provisional order” that the regulation be suspended again, though only in Semenya’s case, giving the IAAF until June 25th to respond with its submissions.

On Tuesday, the IAAF did exactly that, requesting the “dismissal of the appellant’s application to suspend the implementation of the DSD regulations”, and insisting on the need for “a protected category for females where eligibility is based on biology and not on gender identity”.That Swiss Supreme Court case could last another six months.

In the middle of all that, CAS released its full 163-page decision and among the many issues covered was Semenya’s testimony that “oral contraceptives can cause a range of unwanted side effects”. Still CAS noted that millions of women worldwide take contraceptives (including Olympians wishing to avoid pregnancy), and that potential risks “do not outweigh” the need to provide fair competition for women.

Still confused, undecided, or unsure what happens next? Semenya’s season best is four seconds faster than the seven women she’ll race against on Sunday, the outcome there already blatantly decided – unless she runs the wrong way, Semenya will win.

The only certainty so far and throughout is the realisation and acceptance that Semenya is in this position through no fault of her own. At the same time it feels like her fellow athletes are either unwilling or unable to take a proper stand on it all, for better or for worse, for or against.

As the case continues to run from one court to another, one legal team to the next, it could to be time to take that stand, to either properly embrace and celebrate Semenya’s victories for what they are, or begin gently demanding a race of their own for athletes with DSD, given the outcome of any 800m race in which Semenya is involved is already blatantly decided.

And maybe all the while thinking what stand would Pre have taken? An athlete who never once set a world record or won an Olympic medal.