First recorded in Ireland in 1973, they were very rare in Irish waters until 2017 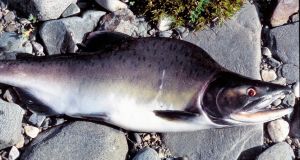 Anglers and the general public have been asked to be vigilant and report the presence of any Pacific pink salmon encountered in Irish river systems over the coming months. Two years ago the species appeared in numbers in multiple river systems in the south-west, west and north-west of the country.

As the species has a two-year lifecycle, there is potential for their reappearance in Irish rivers again this year and every second year thereafter. However, they can also turn up year about, witnessed with a single specimen recorded in the River Suir last year.

Also known as humpback, pink salmon are a migratory species, native to river systems in the northern Pacific Ocean, Bering Sea and the Arctic Ocean.

Populations have also established in rivers in northernmost Norway and the northwest of Russia, originating from stocking programmes undertaken since the 1950s until 2001.

Although a single specimen was first recorded in Ireland in 1973, they were very rare in Irish waters until 2017. In the past week, the species has been reported further south in Norway than anticipated which increases the likelihood of their reappearance in Irish rivers this year.

An identification guide has been drawn up to help with identification and anyone who catches a pink salmon is asked to: Keep the fish; record date and location; tag the fish (a new tag will be issued to replace the tag used) and take a photograph.

Anglers are asked to report catches to IFI’s 24-hour confidential number - 1890 34 74 24 or 1890 FISH 24. As these fish die after spawning, some dead specimens may be encountered along rivers.

Dr Gallagher, IFI’s Head of Research and Development, said: “The potential presence of pink salmon in Irish rivers again is of ongoing concern as its presence in large numbers may negatively impact some of Ireland’s native species such as Atlantic salmon and sea trout as well as estuarine and coastal marine fish species and their associated ecosystems.”

*With the mayfly season virtually over for another year, those early morning risers on Corrib who turned their attention to caenis fishing were rewarded with some great catches. Guests staying at Corrib View Lodge and guided by Larry McCarthy included Welsh angler Tom Chamberlain who, over three mornings, together they accounted for 18 trout, with four over 1.5kg.

David Kidd had five for his early start and Anne McWilliams from Kanturk boated seven good trout, all on caenis and all returned.

Once on scene the lifeboat crew launched its smaller on-board inflatable as the vessel had drifted into shallow water. The two anglers were not in need of medical assistance and their craft was securely towed to Ballyglass Pier.

RNLI coxswain, James Mangan, said: “I commend the two anglers for contacting emergency services and for having VHF radio and wearing lifejackets. The situation could have been more serious had they not followed these precautions.”

*The Bilberry/Lannagh Angling Club will host the McConville Cup in Lough Mask on Saturday, July 20th with fishing from 11am until weigh-in at Máire Lukes, Tourmakeady at 7pm sharp.

Anglers are required to register in either Máire Lukes or Village Inn, Partry, between 8.30 and 10am and must organise their fishing partner and boat. Entry fee of €100 per angler includes a hot meal. Closing date for entries is Monday, July15th, 2019.

For further details and entry form, contact Kieran Doherty at 087-601 5022 or bilberrylannagh@yahoo.com.