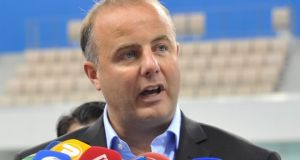 Pierce O’Callaghan: “Minsk and Belarus have always had a huge sports culture, and, for better or for worse, it’s always been a major part of people’s lives here”

Our man has been behind the last folds of the old Iron Curtain in Belarus. He almost died of hunger and thirst in Qatar, and could have been buried or washed away somewhere in Peru.

Everyone has their own idea about what makes the list of the big sporting events of the year, and Pierce O’Callaghan is probably the only person to have a hand in three of them.

It’s not strawberries and cream behind Centre Court at Wimbledon. It’s not Tiger prowling Augusta. And it certainly is not a cold beer in a warm stadium at the Rugby World Cup in Japan, or Hill 16 on the cusp of a Dublin five-in-a-row. At least not if you’re only counting the obvious.

O’Callaghan has been around the world 80 times in the last two years, dividing his time between Lima in Peru, Doha in Qatar and Minsk in Belarus, in temperatures from 40 degrees below to 40 degrees above.

He has a hands-on role helping these three host cities prepare for the biggest sporting events of their time, and it all begins next Friday with the opening ceremony of the second European Games in Minsk, Belarus.

Not to be confused with the European Multi-Sport Championships – which last summer saw big sporting events in athletics, cycling, rowing, gymnastics, and triathlon combined across the two host cities of Berlin and Glasgow – the European Games were first staged in Baku, Azerbaijan, in June of 2015. I’m one of the few people who actually remember them, and that’s because I was there and still have the press pass.

They were originally dubbed the Olympics on a European scale: or the Pat Hickey games given Hickey’s influence in getting them off the ground during his 10-year presidency of the European Olympic Committee (EOC), which he held alongside his even longer presidency of the former Olympic Council of Ireland (OCI).

Hickey’s association is no more as he still awaits a verdict of those charges of alleged ticket-touting from Rio 2016, although he has been invited to the opening ceremony in Minsk on Friday. You know what they say about keeping friends close.

Put up its hand

It seemed the Baku games may have been a very expensive once-off event until the Belarus government put up its hand. The European Games, which have actually been mooted since the 1950s, would survive. The Polish government has already put its hands up for 2023, and there is the potential and push for these games to become one of the big sporting events around.

What is certain is that this is the biggest sporting event to happen in Belarus. Friday’s ceremony will begin 10 days of competition across 15 sports, featuring 4,000 athletes. There will be representation from 50 National Olympic Committees in Europe, including Ireland, who are sending a 64-strong team with a few definite medal contenders, namely boxing world champion Kellie Harrington.

The entire games are to be broadcast across 127 countries worldwide (including Eir Sport and BT Sport), and O’Callaghan has no doubt that Belarus wants to put on a proper show. He knows this because he has visited Minsk every month since October 2016.

In January he was also appointed director of readiness for the IAAF World Championships, set for Doha in late September.

A former international race walker, O’Callaghan was previously director of sports for Baku. Given that experience, O’Callaghan has had a proper inside role in Minsk, including seeing what is left behind that old Iron Curtain.

“There is a mystery about Belarus and the former Russian environment and the culture here,” O’Callaghan tells me. “Minsk and Belarus have always had a huge sports culture, and, for better or for worse, it’s always been a major part of people’s lives here.

“The city is embracing these games hugely. There’s excellent public transport, and almost all the venues were already intact, including the Dinamo Stadium, which stages the opening ceremony and the athletics. It was first build in 1934, was destroyed during the second World War, then rebuilt and expanded ahead of the 1980 Olympics in Moscow, when it was used to host some of the matches in soccer. There’s been an Olympic flame on site in the stadium since then. There’s a long history behind the place.

“It will have the feel of the Olympics, with all the range of sports, and they’re very much into that here. Of course there are challenges, including raising more awareness for the European Games outside of Belarus. But most major European counties are sending large teams, and there is no doubt that over time this event will grow.”

The Pan American Games, which have been going since 1951, are on another scale again: 39 sports (more than the Olympics) with 6,700 athletes and 38 venues across the 17 days of competition.

The government has invested $1 billion, and O’Callaghan has faced some challenges in Lima too, including waking up one morning to an earthquake that measured 8.0 on the Richter scale, followed by a tsunami warning.

For Doha, which hosts the World Athletics Championships from September 27th to October 6th, O’Callaghan has immersed himself in other ways too, including observing Ramadan for the 30 days between May and June. The hunger nearly killed him, and there were thirsty nights too; effectively a no-alcohol culture, he only had two drinks over the 60 or so nights he has spent there this year.

That role of director of Readiness is not tokenism: with 214 participating countries, 2,000 athletes, 10 days of competition, broadcast rights sold to 190 countries with a TV audience of one billion-plus, Doha is ready to host what might be the biggest sporting event of the year.

All they need now is the strawberries and cream marketing budget.