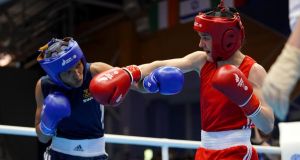 Ireland’s Kellie Harrington in action against Agnes Alexiusson of Sweden in the lightweight semi-final at the European Games in Minsk, Belarus. Photograph: Soenar Chamid/Inpho

Kellie Harrington, Michaela Walsh and Kurt Walker will all fight for gold medals over the weekend at the European Games in Minsk after coming through Friday’s semi-finals.

Harrington, currently Ireland’s only amateur world champion, earned a unanimous decision against Sweden’s Agnes Alexiusson to propel her into the final.

The 29-year-old lightweight won the fight on all five judges’ cards in a comprehensive victory that will see her fight for the gold medal on Sunday (10.15am Irish time) against Finland’s Mira Potkonen, the boxer who knocked Katie Taylor out of the 2016 Olympic games at the quarter-final stage.

The 38-year-old Potkonen, defeated Russia’s Anastasia Beliakova 4-0 to claim a place in the final.

Four of the five judges gave the Swede the third round but by then the stylish Harrington had comprehensively taken the match beyond her opponent’s reach.

It will be the first European Games final the Dubliner will contest against a hugely experienced opponent.

Standout performance “I’m feeling great. The best thing about it is this team, we’re all medaling and this is brilliant,” said Harrington afterwards. “I haven’t had a fight since January. To come here and fight for a European medal . . . this is just fantastic. Agnes has been fighting a lot lately and I knew she was going to come and I knew she was strong. I just stuck to the game plan the coaches gave me.”

Lisburn bantamweight Walker produced a standout performance against Britain’s Peter McGrail, winning out on a 3-2 split decision. It was Walker’s second successive victory over McGrail and the pair dished up another thrilling and close encounter, with Walker challenged at every turn.

“Again, it was so tough, he’s so good tactically,” Walker said afterwards. “I wouldn’t be here if it wasn’t for the coaches telling me my game plan honestly. I wasn’t doing some things right which I should have been doing but I got the decision and I’m delighted.

“It’s unbelievable. Four years ago, I was put out in the first fight and now I’m in the final – hard work, it really does help.”

Walker will face Mykola Butsenko of the Ukraine in Sunday’s final, scheduled for 11.3am Irish time.

There was disappointment for both Regan Buckley and Michael Nevin in their respective bouts on Friday night, with Buckley shaded by a 3-2 split decision by Artur Hovhannisyan of Armenia, while there was heartbreak for Nevin as he was knocked out in the opening round by Italian Salvatore Cavallaro. Both Buckley and Nevin will take home bronze medals to Ireland this weekend.

Earlier in the day, Belfast’s Michaela Walsh won through to Saturday’s 57kg final after she beat Russia’s Daria Abramova on a 3-2 split decision to advance. Her win was a reverse of her European Championship semi-final defeat to the Russian last year.

More tactically aware in the close bout, it was the Irish fighter who was the more accurate of the two over the three rounds, winning on the cards 29-28, 29-28, 29-28, 28-29, 28-29. It was Walsh’s third win of the tournament and she now meets Bulgaria’s Stanmira Petrova for gold on Saturday (4pm, Irish time).

“I feel amazing, it’s great to get the win,” said Walsh. “I boxed that girl last year in the European semi-final and it was a close fight so it was great to get one back.”

Offaly’s Gráinne Walsh had to settle for bronze after she fell to a 3-2 split to Karolina Koszewska in the welterweight division.

Meanwhile, in badminton, Chloe and Sam Magee guaranteed Ireland a seventh medal from the Games when they beat Robin Tabeling and Selena Piek of the Netherlands in two sets (21-19, 21-17) to book a semi-final place.

The Magees will now face Gabby and Chris Adcock of Team GB in the semi-finals.