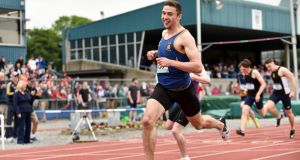 Aaron Sexton: has risen through the ranks of schoolboy athletics and rugby with what can be described as properly frightening speed.

Once upon a time we dressed so fine in our shiny tracksuits and striped neon tights. A lot of trends have come and gone in the 30 years since the 1989 Irish Schools Track and Field Championships were staged on the Belfield car park that was an athletics track back then and there are other trends that are slower to change.

That class of 1989 proved to be something of a special crop too, and every staging of these championships is like a day-long crystal ball where faces and names present themselves with the dreams and possibilities of what they might become. Not just in the sport of athletics.

Glance back through some of the innocent faces and names from that day in Belfield and their future was indeed bright, eight of them going on to compete in the utter pinnacle of the sport that is the Olympics.

It’s all brilliantly caught in a 25-minute highlights package which aired on RTÉ a week later, presented by Aonghus McAnally wearing a very shiny tracksuit with deft commentary by George Hamilton, still available for viewing thanks to the wonders of YouTube, all still permeated by the ever sweet fragrance of grassroots athletics.

1989 senior boys hammer champion Roman Linscheid also competed in Atlanta and silver medal winner Paddy McGrath made it to Sydney. Mark Carroll finished down the field in the 5,000m but later prospered into one of Ireland’s top distance runners, competing in Athens in 2004.

Several others went on to win Irish senior titles on the track and field, including Sharon Foley and Antoine Burke in the high jump, and that’s the hope for some of the young athletes competing in the 2019 edition across the 122 events in Tullamore throughout Saturday.

For others, Tullamore may well bring down the curtain on their athletics days, such is the nature of any sport. Some are lost in other ways.

From that class of 1989 Victor Costello still stands out as the one and only Irishman to have competed in both the Olympics and the Six Nations. Once referenced by our rugby writer Gavin Cummiskey as – “one of the rare naturally huge specimens produced by Ireland” – Costello was also the last Irish international rugby player to also throw his weight around the shot put circle.

Costello actually spent more of his youth in the throwing circle than he did on the rugby pitch, winning his first Irish senior shot put title at age 16, in 1987, and adding another four senior titles up to 1991.

In the summer of 1992 he threw a personal best of 19.93 metres, the second furthest shot put in Irish athletics history, also good enough to qualify for the Barcelona. There, Costello finished 11th in his qualifying group, and at age 21, still had plenty of room for further improvement.

Instead, somewhat turned off by the “loneliness of life as a shot-putter”, he concentrated solely on his rugby, making his senior international debut for Ireland in 1996, against the USA.

He retired 10 years later, with 39 Ireland caps (scoring four tries), not forgetting his 126 appearances for Leinster, and further spells at Connacht, and London Irish. It’s an impressive sporting CV by any standards – and also begs the question: why aren’t more schoolboy rugby players trying their hand at athletics? Same on the women’s front, naturally.

Ireland has only ever had a select number of rugby internationals who were also capped for Ireland on the track or field, including Brendan Mullin in the sprint hurdles and Michael Kernan in the sprint relay.

There has always been evidence that specialising in one sport in school not always the healthy option, and the popular myth and misconception that it takes 10,000 hours of specialised practice to succeed in your chosen sport is freshly addressed in a new book by investigative journalist David Epstein, titled Range: Why Generalists Triumph In A Specialised World.

Epstein also wrote The Sports Gene: Inside the Science of Extraordinary Athletic Performance and makes the case that most successful athletes start out playing a range of sports, using the example of Roger Federer, who tried his hand at skiing, wrestling, handball, skateboarding, football, badminton before bringing most of what he learned to the game of tennis.

In keeping with that trend, Aaron Sexton has risen through the ranks of schoolboy athletics and rugby with what can be described as properly frightening speed.

At age 18, about to begin his A-level exams at Bangor Grammar School, Sexton has perhaps a final chance to leave a lasting mark on athletics when he defends his senior boys 100m title in Tullamore, where last year he improved the record to 10.52 seconds.

Already Ireland’s fastest schoolboy, once his exams are out of the way Sexton will go full-time into the Ulster Rugby Academy, possibly competing on the track a couple of more times this summer, before being ultimately lost to rugby.

Still it would have been a lot worse if Sexton’s sporting talent was never allowed to be found in athletics. David Kennedy, head of physical education at his school, has closely followed Sexton’s rise through both sports, and while understanding why rugby was always likely to win out over athletics – the profile, the perks, etc – he has no doubt one sport has positively impacted on the other.

It’s a sporting trend that could be further nurtured, on the track and the field. Most schoolboy rugby players don’t extend their playing days beyond their season, or indeed their school days, and what Sexton has also demonstrated is that it’s possible to succeed at both sports at the highest level. It’s not just for the speed merchants either; as Costello demonstrated 30 years ago, there is an additional skill component to field events which does require some considerable practice, but essentially they’re all about throwing your weight around.

And for every one that might ultimately be lost to rugby or another sport, another might be kept by athletics. Sarah Healy, who signs off on her unbeaten schools career over 3,000m in Tullamore, and who also played hockey throughout her schoolgirl days at Holy Child Killiney, is already intent on setting that trend.