McGonagle relentless in his pursuit of the best for Irish athletes 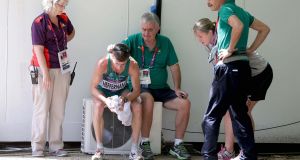 Patsy McGonagle consoles Rob Heffernan after he finished fourth in the 50km Walk at the London Olympics in 2012. McGonagle assured him it wouldn’t be the end of the story, knowing full well the Russian winner Sergei Kirdyapkin was doping, as has since been proved. Photograph: Morgan Treacy/Inpho

“Sonia’s on her shoulder, but Szabo finds something... again.

I’m waiting for Sonia to burst past Szabo but... it doesn’t happen. Sonia is out of time... out of track. Szabo has nicked it.

Twenty-three hundredths of a second.

In his 25 years as Irish athletics team manager there was never any doubt whose side he was on, his cursed reaction to O’Sullivan’s silver medal over 5,000m at those Sydney Olympics some evidence of that.

There is a story from six years earlier which tells how McGonagle went about earning the respect of the athlete, and how it invariably became mutual.

In one of his first assignments as manager, for the 1994 European Cup, McGonagle assembled the Irish team at the Skylon Hotel in north Dublin, declining the option of a big room.

“I wanted proximity. I didn’t want any distance between me and the team. I had to get them psyched.”

The team meeting underway, O’Sullivan arrived a little late, already the global superstar, denied two World Championship gold medals the year before by the Chinese, and weeks away from winning her first European title.

“The seats were all taken and you could see her train of thought.

Where am I going to sit?

I had never met Sonia O’Sullivan before.

I looked over at the ground beside the wall.

Part of me was worried that she was such a big star that she’d kick up a fuss but no, Sonia didn’t bat an eyelid. Sonia was a gem. Of all the athletes I managed, Sonia was the best, without question.’

So goes one of the opening passages of Relentess, McGonagle’s just published memoir which in part is a race through the last 25 years of Irish athletes, in part a reflection on a sporting life which began with memories of his own father Patsy, an army officer, on the Irish football team at the 1948 London Olympics, and continues with McGonagle’s influence on Finn Valley Athletic Club in his native Donegal.

It’s also one of the more anticipated books on Irish athletics in years, given McGonagle’s inside role and insights over those 25 years, which first began at the World Junior Championships in Seoul, South Korea back in 1992, and ended after four Olympic Games, six World and six European Athletics Championships.

He last managed the Irish team at the World Athletics Championships in London in 2017, and during his time as manager oversaw a period of unprecedented success in Irish athletics: the winning of two Olympic medals, nine World Championship medals, and 27 European Championships medals, between indoors and outdoors. Not that everything went to plan.

An Irish athletics team manager may lack the intimacy of an inter-county GAA manager, or the ultimate responsibility of a rugby or soccer manager, but they can be and often are as influential. Truth is McGonagle wouldn’t have lasted as long without the respect of the athlete, and in my 25 years of knowing him there was never any doubt about who he was fighting for, and indeed against.

Written with popular Donegal sports journalist Chris McNulty, and acknowledged in the foreword by Seb Coe as “always armed with a smile and the look of a man on mission”, McGonagle also shines a light on what ultimately made certain Irish athletes stand out above others.

Long before Derval O’Rourke’s breakthrough World Indoor gold in 2006 he spotted something: “Mentally, she was so strong, and you could never doubt her. Ever. You looked at Derval before a race and you sensed something that very few athletes have. She just had that magical thing we simply refer to as ‘it’...”

He leaves little doubt David Gillick left behind a gold medal at the 2010 European Championships in Barcelona, and other medals appeared to slip through the net, including Rob Heffernan’s after the 50km walk in London 2012.

McGonagle was the first man to throw his arm around Heffernan when he finished fourth, though immediately assured him it wouldn’t be the end of the story (knowing full well the Russian winner Sergei Kirdyapkin was doping, as was since proven).

“The walkers had balls. There were in a very unsexy sport and they were very tough people.”

Although it seems at constant odds with Athletics Ireland, which at one point he unapologetically admits drove him to drink, McGonagle was unquestionably relentless in his pursuit to get the best out of Irish athletes.

A graduate of St Mary’s College of Physical Education in London in 1972, and one of the early pioneers of full-time PE teachers in Ireland, he also spent two periods as a selector and coach with the Donegal senior football team in 2000s, at the height of their off-field misadventures.

He describes recent European Indoor 800m bronze medallist Mark English as “‘a Rubik’s Cube among my many puzzles”, one of the few Irish athletes, along with Thomas Barr and Ciara Mageean, with proper medal-winning potential. Only a year out from the Tokyo 2020 Olympics, questions around the sport remain.

“Athletics Ireland are more proactive now that there were for so long, standing up for their sport in a way and painting it in a positive light... but athletics is a lonely game, no one claps you on the back. You’re in the real world and there is no place to hide.”

And in a typical parting shot he points at some of the problems, such as – wait for it – the parkrun.

“The experience in England is that parkruns are destroying clubs. People with no allegiance to anyone just turn up and run for free. There are a lot of positives in the parkruns but it is not in any way an add-on or a positive for local clubs.”

Relentless: A Race Through Time by Patsy McGonagle (Hero Books), is launched on Monday (8pm) at the Finn Valley Centre, Donegal, by Olympians Rob Heffernan and David Gillick

1 Will the penny drop at Cork GAA over Mike Ashley?