Joanne O’Riordan: Football needs to up its game when it comes to racist abuse 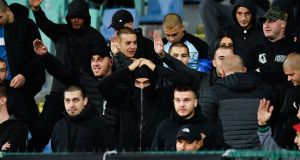 Bulgarian fans chanted racist abuse and and gave the Nazi salute during the European Championship defeat to England at the Vasil Levski National Stadium in Sofia. Photograph: Nikolay Doychinov/AFP/Getty Images

We’ve learned a lot about sports and society – and those who govern both – over the last few days.

Holding a respect banner does not invoke respect. The three-step Uefa protocol only further proves if racists are racists. To walk off a pitch is to allow the racists to win. And more importantly, despite football and sport’s best efforts to portray itself as something that unites groups of people, sometimes it only showcases the deep divisions within our society.

Gareth Southgate, Harry Kane, Raheem Sterling, Tyrone Mings, Marcus Rashford, Croatian referee Ivan Bebek and Bulgarian captain Ivelin Popov became heroes on a night of poisonous hatred and bafflement from those in charge as to what to do.

Firstly, the thing about those who chant racist abuse or make Nazi salutes is that education, in my view, will not fix this.

These people know precisely what they are doing. In front of the assembled journalists from Bulgaria and England, Bulgarian goalkeeper Plamen Iliev and manager Krasimir Balakov also made their views known. They had not heard any form of abuse and actually commended their fans for being so well behaved. Are Uefa and co. really trying to tell us that education will fix this problem?

The Uefa protocols to date have proved entirely ineffective. The three-step protocol is something that needs to be looked at. Putting the onus on those affected, on the referee and on everyone bar those shouting racist abuse is something that cannot continue. Is there any normal work environment that would allow someone three shots at racism to prove they are in fact racists?

We expect everyone else to make decisions where no law protects them. If Kane and company left, England would have technically lost the game. If the referee facilitated a walk-off, then Bulgaria lose. But the racists? No meaningful consequences for them.

Maybe a pesky fine for their FA, some stadium closures, but nothing too drastic.

Given where we are at the moment with the protocols and the results of investigations into racism, the bar has been set incredibly low.

Relying on those who speak out, risking further isolation, and implement a punishment system that doesn’t deter racism, isn’t exactly going to push an agenda or ensure those abused are protected.

Instead, the fans are not really deterred, the punishment doesn’t push the club to sort out their fans, and the vicious cycle repeats itself.

Racism is multifaceted. Racism has many ways of rearing its ugly head. You don’t have to necessarily express it in a vulgar way like the Bulgarians, and therein lies another issue.

When we do find elements of racism, we decide, be it from a media perspective or societal issue how to frame that racism. It’s a universal thing, we don’t want to necessarily call anyone a racist, because that means we all have to look at our behaviour.

Nobody wants to do that much deep thinking and, at the end of the day, we also don’t want to find that behaviour that could possibly frame us as racist. We’re all against racism, but nobody wants to put in the required work to stamp it out.

By being so multifaceted, it requires deep thinking to work out how racism works. Racism is not only a material thing, something we can look at, point at and use as precedent. It is also an ideology, a way of thinking that ranges from moderate to extreme levels.

In a way, admitting that there is racism, not just in sports, but in the world at large is almost like putting on a new pair of glasses. It makes you re-evaluate everything, from your thoughts, words and actions to analysing what others do.

Now Uefa are being forced to try on their new glasses. After years, decades nearly, of inactivity, Uefa are forced to add a precedent that is not there. They are now being forced to frame racism in a footballing world where there are so many levels to it.

Racism is a societal and cultural issue. But if football wants to be known as the beautiful game, it has to enforce stricter laws and separate itself from the bigotry. It’s time for sternness and effective protocols. Until then, football, just like society, will never be a separate area where bigotry and prejudice are not accepted.

1 Seán O’Brien: Anger over my parents’ break-up never left me
2 Ireland get the job done against Italy to keep alive Six Nations hopes
3 Hugo Keenan and Will Connors: The best of friends, the best of debuts
4 France warm up for Ireland with impressive win over Wales
5 Ireland 50 Italy 17: Ireland player ratings
Real news has value SUBSCRIBE
Crossword Get access to over 6,000 interactive crosswords