Sonia O’Sullivan: Doha wait is over and the heat is on

Athletes will be trying to peak going into early October, and will then shut down 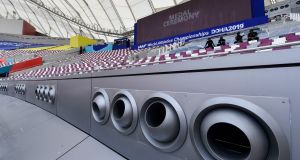 This has been the most long-winded and disjointed athletics season that I can remember. The Sydney Olympics did run this late into September, yet here we are at the end of the month still waiting for the starting gun to be fired at the World Athletics Championships in Doha, Qatar. It finally begins on Friday, September 27th, and continues to Sunday, October 6th.

For any athlete competing it must feel like the longest year of their life. Nothing drags on longer than the wait for any major championships: it also feels like all regular momentum of the season has been lost, which creates extra uncertainty for that athlete and the athletics fan.

That’s only part of the challenge. If you were looking for any location in the world to run your best race then chances are the last place you would choose is Doha. Even at the tail-end of a desert summer temperatures rarely drop below 30C, even overnight.

There is some relief promised in the stadium. While not fully enclosed, there will be pretty powerful air conditioning cooling the air to the mid-20s. It doesn’t sound like the recent global warming and climate change protests made much of an impact in Qatar, and it’s hard to believe when the decision was made five year years ago to give the championships to Qatar, that this was an acceptable compromise to combat the heat and likely impact on an athlete’s health and performances. It’s also part of the compromise for the soccer World Cup in 2022.

It’s quite different just flying in for one race and leaving; sticking around for heats, semi-finals and finals will create some challenges.

It was initially thought that many athletes might forego the championships – being so late in the season, leading into an Olympic year, weighing up the risks and benefits etc. Yet almost all the top athletes will be there, including 16 European athletes to defend their World titles won in London two years ago.

Still, the season had to be paced very differently. The first Diamond League took place in Doha back in early May, and since then athletes have been juggling races, training camps, their national championships, another training camp, before eventually heading to Doha. This is certainly going to test the motivation and mental strength.

It doesn’t help either that September is typically when the athletics season starts to wind down, and athletes are thinking about having some time off and maybe a holiday. Instead they’re trying to peak going into early October, before completely shutting down given there will be no follow-on races to close out the season.

This may well create some extra surprises in Doha, and which might make it even more intriguing for athletics fans – even if most will be watching from the comfort of their own homes.

Local organisers haven’t managed to attract many visitors to Doha for a variety of reasons, not least the distance, and it looks like they will be working hard to fill the seats with local workers and school children.

Outside the stadium the marathons and race walking will not get much relief from the heat. The marathons start at midnight – with some water showers on the course for temporary relief – but even without direct sunlight it will be 30C.

This makes it very hard on athletes trying to adapt their training and sleep patterns to prepare for racing at midnight. They will have to cope with running in high temperatures while trying to deceive themselves it is cooler just because it is dark. I can’t imagine many athletes heading down to the track at midnight to get some late-night sessions in.

In Ireland it’s always difficult to rationalise and explain when a very good result may not deliver a medal. There is a huge buoyant mood towards the Irish rugby team and the World Cup – the adrenalin and momentum is clear there. There is such a wave of positivity that even people who know nothing whatsoever about rugby are being engaged.  Athletics is a simple sport and it most instances easy to understand: you see the winner first across the line. Yet sometimes there is more at play. It has also become a bit too predictable when performances are off the charts, and then the doubts creep in. When people start to lose faith in what they are cheering for then the passion and connection are also lost.

Some people always had doubts about Russian athletes. Then it was confirmed in one swoop in 2015 that there was state-sponsored doping. Four years later and Russia has still to clean up and prove it is willing to abide by doping rules.

Kenyan athletes were usually seen as natural athletes, powerful over cross-country and using team work. There was a desire to succeed. Now there has been a trail of positive tests from Kenyan athletes, and their reputation is not what it used to be.

You also have to wonder is it so great to have 210 countries at the World Championships? More countries aren’t necessarily better, especially if you don’t have a firm grip on their doping status.

Some countries continue to get away with things below the surface because they can portray a squeaky-clean image on the outside.

Athletics has been struggling for attention and coverage. In recent times it has become an increasingly niche sport, and most fans are those involved or have some connection with the sport from a previous life.

Having a World Championships in a place like Doha creates even more distance, and the International Association of Athletics Federations must know this. Yet that doesn’t mean there won’t be some great races over the next 10 days.

After a long wait the heat is now definitely on.