Sonia O’Sullivan: Athletics needs to be more open in talking about weight

Controlled weight management is necessary to achieve success in the field 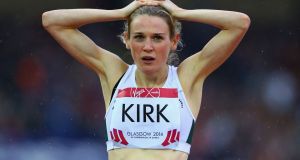 Katie Kirk: was Irish 800 metres champion in 2014, only to find herself struggling with an eating disorder in the five years since. Photo: Cameron Spencer/Getty Images

Sometimes it takes what appears a negative story with a positive outcome to attract attention to an area of sport that is often brushed over or else left to sort itself out. Not just in elite sport and not just with women either.

There was nothing new or even particularly startling about hearing Katie Kirk recount her experience of an eating disorder on RTÉ’s Today with Miriam O’Callaghan on Tuesday morning, having also opened up in a newspaper interview the week before. It shouldn’t even be that she needed some honesty to share it.

Kirk was Irish 800 metres champion in 2014, only to find herself struggling with an eating disorder in the five years since, before making a successful return to the track this summer.

Many others have told a similar story and for me the missing link is the non-normalising of the obvious: diet and food intake should be a part of every athlete’s normal discussion, seen as a positive rather than a negative, and not just from the athlete’s perspective.

In a nutshell, I was being told I needed to lose weight

It’s also an area very few coaches are willing to deal with; they seem to just hope it will go away. We only ever see the negative side of the topic that is body weight when a promising junior is considered to have issues, health problems, and often it’s a difficult topic for the coach to broach.

There is a fear of overstepping the line, whatever that means, of causing tension or offence. These are just personal observations that only truly come to light when we see an athlete that goes to the dark side, one who spirals out of control while trying to finely tune and manage every detail in their life to be the perfect athlete and achieve more.

The tendency is to be extreme with every facet of their life including the difficult balancing act of trying to find the right level of basic fuel and energy required to be able to train and compete.

It’s nearly a relief when someone speaks out and shares their story; it resonates with so many athletes on so many different levels. Some that may have navigated a similar path, those that turned off along the way; others that somehow came out the other side, often due to just pure luck as it could just as easily have been a different outcome.

I could probably put myself in the latter category, navigating injuries in college, lack of consistent training, and the inevitable first year of college weight gain.

Then there are the moments in your life that you never forget, mine goes back to my second year at Villanova, over three decades ago and the head coach Marty Stern asked me to take a walk. Sometimes it’s easier to walk and talk so you have a good idea you’re about to get a talking to.

We walked up through the middle of the campus, probably had a coffee but it was the walk back down that often comes back to me as clear as if it was yesterday.

As a Villanova scholarship student athlete, I was expected to stand out not just blend in. Up to this point I had been injured and basically had no real consistent training so I needed to start thinking like an athlete, doing everything I could to be a better athlete, listen to my body and pay a bit more attention to what I was eating.

In a nutshell, I was being told I needed to lose weight. But it wasn’t like it came as a shock to me, it was just spelling out the obvious and I took it for what it was, good honest advise.

From that day forward my life changed for the better. All of a sudden there was one more thing in my life that had to have a purpose and it was linked to my life as an athlete. I never saw it as a negative but as a positive motivating factor in my life. I was 20 years old and I was being spoken to as an adult. I needed to react like an adult in a controlled manner and use this extra variable to improve as an athlete.

I already had the training tools and methods from my coach back in Cobh, Seán Kennedy. Now I had to combine the two and be a better athlete, in the student athlete environment. This was just early days and I was learning that with routine, structure and consistency in all facets of life new levels could be achieved.

Taking control and being in control often meant being different and not always going with the flow.  It’s not easy when you travel the world to races, stay in the best hotels with lavish spreads of food not to eat more than you need. That’s the thing. There has to be limits and controls in an athlete’s diet but most try to pretend that it’s just normal and don’t really discuss the self-imposed limits.

Elite athletes are at the extreme end of the spectrum and to get there you need to live on the edge of what is seen as normal. Training, sleeping, eating all these variables can be pushed to the limit. It’s just how far you can push them and manage the outcome that determines what you can get away with and what risks you are willing to take to achieve more.

There was a time when athletes would just go for it and take the risks, but now there is so much more scope for control and management. We see athletes compete more often, have less time off and achieve greater results. Times and barriers continue to be broken but there is no getting away from the fact that to do this an athlete needs to be lean and strong.

It’s no longer lighter is better, but a more managed approach that should be easier for coaches to incorporate in their athlete’s lifestyle beyond the training track, in terms of performance weight management. It’s an area that is openly discussed in other sports, boxing, rowing, horse riding, where weight is deemed part of the entry.

In athletics, there is a definite need for controlled weight management to achieve success. Anyone who runs knows if they are lighter they feel smoother but it’s the delicate balancing act between leanness and strength that needs to be openly managed and discussed from local clubs to international teams.

The very nature of athletes as individuals means they are often left to their own devices. Some of the extremes of extra training and restricted diet are left unmonitored when they should be managed. Athletes should be asked the difficult questions along the way – not just when things begin to unravel down the track.

I often wonder did I create this balance in my life, or is it normal or maybe a more normal version of the extremes. Whatever it is, once committed you have to believe in what you do and balance the scales of input and output to lead a balanced healthy lifestyle. The extremes and limits are all dependant on what you are trying to achieve.

We are all different and this is one area where there are so many variables, and each athlete needs to find what works for them, but what is certain is that it doesn’t have to be a secret to be successful.