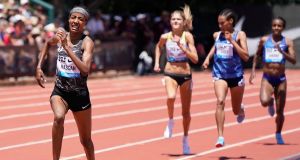 Last Sunday night I stayed up a little past bedtime to watch the Prefontaine Classic, one of the IAAF Diamond League events where the middle-distance races nearly always stand out. This year was no exception.And not just for the fastest time run over 3,000m by women since the Chinese invasion in 1993 – or Ma’s Army as they were better known – but also the manner of the race.

Sometimes these Diamond League races are known for pacemakers steaming away from the field, or maybe one athlete tagging along and hoping to achieve a fast time.

It’s always a bit of a catch-22 situation for meet organisers; fast races score highly in the comparison tables, but the more entertaining races are often when the field sticks together, ignores the pacemaker, and instead we get a true race where the athletes try to outsmart each other, and the result comes down to a tight battle over the final metres.

The Prefontaine Classic is normally held at the intimate Hayward Field in Eugene, the athletics track of the University of Oregon. However, this year it was staged at Stanford University, Palo Alto, a track where many athletes have gone over the years to post fast times early season. So it’s known for fast times.

Hayward Field is known to be as fast, but is currently out of action due to rebuilding for the World Championships in 2021, which will take over “Tracktown USA”, as Eugene is affectionately known in distance-running circles across the US.

On Sunday the women’s 3,000m set off at a fair clip, the pacemaker going through 1,000m in 2:45 – you just wondered who could survive such a fast pace? The main contenders were Dutch athlete Sifan Hassan, Genzebe Dibaba and Letesenbet Gidey from Ethiopia, and Germany’s Konstanze Klosterhalfen, all well in contention and running at a pace faster than they had ever run before.

In the end they would all finish the race with personal bests, national records, and area records: Hassan won in 8:18.49, Klosterhaulfen and Gidey less than two seconds behind, and what many consider the real world record.

That’s because the top three times on the all-time list are still from those Chinese athletes, from a time when they have indicated previously in a letter to a journalist that they were trained and doped by a state-sponsored programme that has been swept under the carpet and never been thoroughly investigated.

Still, it has taken 26 years to see an athlete come into the final straight and see the clock just ticking over 8 minutes, a time so many thought was so far out of reach for so long. The world record is still 12 seconds away – that’s about 80m – and an improvement of just under two seconds per lap is needed to overcome that mark.

There are new training methods employed to allow athletes to run so fast on such a consistent level throughout the season. Hassan and Klosterhaulfen train in the same Nike Oregon Project, where every possible advantage is available to them; training facilities, nutrition, recovery, strength training, psychological, and equipment, anything you could possibly think of.

The Oregon Project was set up in Portland under the guidance of Alberto Salazar, who helped Mo Farah to reach the heights he has, including double Olympic champion in 2012 and 2016.

They have unquestionably taken the life of a professional athlete to a new level, and while training on the Michael Johnson track at Nike Campus they are always testing new running shoes, pushing out the boundaries.

We all know how bikes have changed through the years, similar to Formula 1 driving, where the equipment is becoming equally as important as the athlete to help push the boundaries of human ability.

In recent times Nike has released the 4% racing shoe as part of the Breaking 2 Project and the Kenyan Eliud Kipchoge’s attempt to become the first man to break two hours for the marathon. It has recently updated the shoe again, the Next%, mostly used by athletes running road races and marathons.

These shoes have a carbon-fibre plate that helps to propel the runner forward and Zoom X foam which returns energy as your foot hits the ground, improving running efficiency by up to 4 per cent.

To me it sounds a bit like how you observe running on a grass track; how much you get back depends on whether the track is dry or wet. Then go to a normal track and even the road and you get even more energy back as you hit the ground.

Now, if you have shoes that help with this also there is no doubt you will run faster, experience a feeling as if you are gliding along the road or track.

Still, some of the science behind it does sound a bit mumbo-jumbo, and there are sceptics out there about the actual benefit of the Nike 4%. Yet if you just take out a pen and paper, take a few athletes and their times and improvement, do a few mathematical calculations, and it all starts to add up.

It’s interesting that there has not been so much talk about the shoes worn by Nike athletes on the track – Laura Muir was seen with what looked like a 4% spike shoe indoors, and now Hassan and Klosterhaulfen are also sporting the new-look spikes.

It’s hard to believe that the spikes would give a 4 per cent advantage as over 3,000m this would be in the region of 20 seconds. Yet up until recently the times run regularly were 10-15 seconds slower, so to me it looks as if there has to be something in the shoes.

The road shoes cost €250, but these would not be your everyday running shoes, and would be kept for special occasions when you really want to test yourself and post a fast time.

I have worn the 4% a few times in my local park run, and without a doubt each time I have run close to a minute faster than my current fitness level with less effort. So I have no doubt the shoes give back and allow the runner to run faster than if just wearing regular running shoes.

Of course it’s still all relative to your level as an athlete, and how important you value time. Is it worth €250 to break 20 minutes at park run or try crash through the three-hour marathon barrier?

The other question is whether or not we go with the flow of running shoe evolution or flag the times that are obviously equipment assisted?

And how do you compare times today with those gone by with a 4 per cent adjusted time?

Envoi Allen continues relentless march at Punchestown 13:30
England need 36 to win as bad light halts play in Sri Lanka 13:04
Bríd Stack hospitalised after injury in AFLW pre-season friendly 11:28
India rearguard frustrates Australia and leaves series in the balance 11:19
Brendan Steele takes the lead at Sony Open with a round of 61 11:10