According to Fifa this year’s World Cup was the most technical, most skilful and most dramatic 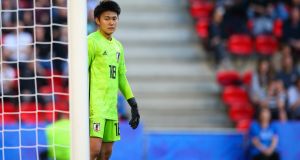 Japan goalkeeper Ayaka Yamashita: she proved it’s all down to reflexes, reactions and good fortune to be a top goalkeeper. Photograph: Craig Mercer/MB Media/Getty Images

We all felt that this year’s Women’s World Cup was going to be a tipping point for the women’s game and women in sport in general. We’ve seen an increase in attendance, awareness, viewing figures and possibly participation. Ellen White, England striker and World Cup top goal scorer, has remarked in interviews how her infamous goggle celebration is now everywhere, with men recreating the celebration for her in her local supermarket.

We even had a record number of men complaining about the women’s game being shoved down their throat – “it’s not fast enough”, “it’s not technically good enough”, “it’s boring” and “I’ve seen the Japanese national women’s team more than my own intercounty team”.

Spare a thought for anyone who came to mind, because Fifa and its technical support group studies are here to tell you that they are wrong.

Football’s world governing body released its analysis of the tournament in a 105-page report which its coaching and player-development department head Branimir Ujevic said had confirmed the game’s holistic development.

According to Ujevic and Fifa, this year’s World Cup was the best, most technical, most skilful and most dramatic ever (be generous, there have only been nine under the Fifa banner).

Fifa was prepared for the poor bloke who is sick of women’s sports – it had almost every statistic ready to go on the report’s launch day last Sunday.

Goalkeepers and the quality of goalkeepers was a huge talking point this year. Some decided the goalkeepers were too small to possibly cover such a large area of ground in a short space of time. Sure, on average female athletes are generally smaller than their male counterparts, but it’s not necessarily a height advantage you need. Japanese goalkeeper Ayaka Yamashita proved it’s all down to reflexes, reactions and general good fortune to be a top goalkeeper.

Sure, Japan lost 2-0 in the end to England, but Yamashita, standing at just 5ft 5in, showcased her skills to global audiences. In the first half the 23-year-old made a reflex save to prevent Rachel Daly from doubling England’s advantage, while after the break she was at full stretch to push away Tony Duggan’s half volley.

Countries like Argentina proved that size and age do not necessarily matter. Their goalkeeper Vanina Correa, after taking a career break due to the arrival of twins, showcased all that is good about goalkeeping against England.

We also had Nigerian’s 18-year-old goalkeeper Chiamaka Nnadozie, who became the youngest goalkeeper to keep a clean sheet at a World Cup in Nigeria’s win over South Korea.

And we also watched stand-out Chilean goalkeeper Christine Endler who quite literally saved the Chilean women’s team from an outrageously humiliating defeat to the USA.

According to the Fifa report, goalkeepers had an overall save rate of 70 per cent, five percentage points up from 2015.

Not only were the saves up, but the distribution from goalkeepers was a lot smarter. Goalkeepers played 26 per cent of their passes “short”, as opposed to 15 per cent in 2011 and 16 per cent in 2015, thus showing a desire from all teams to start playing from the back rather than lumping the ball up the pitch.

Not only are goalkeepers becoming more tactically aware, but the use of attacking wing backs is also an example of how the women’s game is changing. Some 27 goals at the World Cup are headers, which is up from 23 in 2015. It shows that teams are stretching the pitch laterally and executing crosses at a rate not seen before in the women’s game.

In the end the technical study group showed what we already know about the women’s game – it’s stronger, faster and better.

Fifa president Gianni Infantino has already announced an extra $500 million for the women’s game, and while this is a huge plus we cannot allow the same mistakes when it comes to funding criteria, auditing and following up on funding.

The women’s game is not just an accessory to the men’s game. It’s not football’s Olympics that dazzles every four years only to fade into the background.

If this year’s World Cup is to be judged correctly it should be done on a before- and-after basis. Plans should be implemented locally, nationally, and internationally with a transparent mapping process.

An extra $500 million is all well and good, but when little girls at grassroots level do not have to struggle to play football at an organised level then we can safely say that 2019 was a tipping point for women in sport.