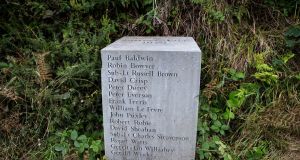 The Fastnet 1979 race memorial to the 15 participants that died situated close to North Harbour at Cape Clear island off the West Cork coast. Photograph: David Branigan/Oceansport

When the massive fleet of 452 boats departs the Solent at the start of the Rolex Fastnet Race on Saturday, Conor Fogerty’s Raw will be among only a handful of Irish boats hoping for a strong showing in the 605-mile race.

His brand new Figaro 3 class entry featuring a foil-assisted hull is part of a programme that the former Sailor of the Year hopes will lead to an Olympic campaign for the Paris 2024 games that will feature a two-handed mixed offshore event for the first time.

Given the almost unparalleled level of interest and skill in this type of sailing in France, at least one of the podium places might easily go to the host nation.

But for the coming week, all eyes will be on the western approaches as upwards of 5,000 competitors set-off to race around the ‘teardrop of Ireland’ just three nautical miles from Cape Clear island in West Cork.

And while the start looks set to be a light airs affair, current weather forecasts suggest a stronger breeze to follow with the prospect of a new course record as well.

It is also the 40 th anniversary of the fatal 1979 Fastnet Race in which 15 competitors lost their lives in storm force conditions on the Irish Sea.

Numerous Irish crews were involved in that race that is the subject of an RTÉ Doc on 1 documentary to be broadcast on August 10th. It was co-produced by John O’Donnell who was then a crew-member on Sundowner and includes contributions from others such as Brian Matthews, Donal McClement, Neil Kenefick and Ron Holland.

Today’s navigators will be relying on several sources of weather data as part of their tactical routing – options that were not available in 1979.

Then, initial forecasts gave force 6 winds but this was soon updated to strong gale 9 and then storm 10 imminent, all within 12 hours. This led to dozens of boats being capsized, abandoned while several sunk.

Numerous safety improvements have since been made to off shore sailing. Today’s turnout is 50 per cent bigger than the race figure 40 years ago. Online entry typically sell out like coveted concert tickets within five minutes.

The navigators, whether amateur or professional, all combine available data and sources with human interpretation, something that is the bedrock of the Met Éireann forecast service that is widely trusted by Irish seafarers.

It is this human factor that differentiates this forecast from various apps (not including the Met Éireann app) that are also in widespread use. Crucially, when the Marine Casualty Investigation Board considers an incident, it is only the Met Éireann forecast that is relied upon.

Ironically, the multiple weather options available today has led RTÉ to drop the long-established sea area forecast from its RTÉ Radio 1 schedule at 12.55pm just before the lunchtime news programme.

Met Éireann also doesn’t include yellow weather warnings – also known as small craft warnings – in its main RTÉ radio weather updates as there would just be too many to include and these are now considered to be a “specialist forecast”.

In a further twist, the ESB sponsors these weather bulletins with regular adverts cautioning against sailing near overhead powerlines – specifically on the Shannon and on canals where maximum mast height for safe clearance is 9.6m – due to around five incidents per annum.

Sailors are now routinely warned against the risk of electrocution (if sailing on the Shannon) but should not expect to hear of important wind warnings from the national broadcaster.