Kellie Harrington ruled out of Europeans with hand injury 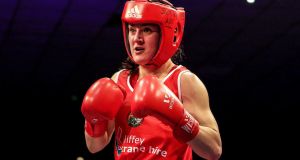 Kellie Harrington will not fight at the European Championships in Spain due to a hand injury. Photograph: Laszlo Geczo/Inpho

Irish lightweight world champion Kellie Harrington has lost her battle to be fit for next month’s European Championships in Spain because of a hand injury. The Dubliner sustained her injury at the European Games in Minsk in June and was forced to withdraw from her gold medal bout.

Harrington was due to meet Mira Potkonen in the lightweight final but following her semi-final win over Sweden’s Agnes Alexiusson was deemed unfit to box. Potkonen was the Finn who earned a decision over Katie Taylor at the bronze medal stage in the Rio Olympic Games in 2016.

Playing it cautiously, Bernard Dunne, high-performance director with the IABA, said that Harrington will not risk further damage to her hand in Madrid with the more important World Championships taking place later this year in Russia.

Harrington will defend her 60kg lightweight title for the first time at the World Championships, which take place in Ulan-Ude in October.